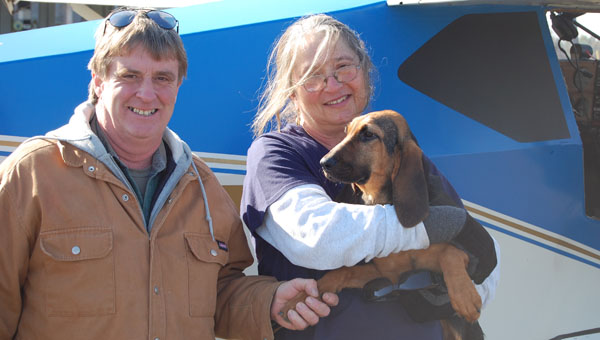 Steven Neely and Kandys Killough stand with Melly, a hound being transported to Memphis, Tenn. with the help of Pilots N Paws and The Butler County Humane Society. Advocate Staff/Patty Vaughan

Steven Neely will fly more in his plane than just passengers with two legs these days.

Neely is a member of Pilots N Paws, a non-profit organization that allows pilots and cars to travel with animals to take them out of shelters and put them in happy homes.

Greenville will be a pit stop for Melly and Kandys Killough, vice president of the Butler County Humane Society will be keeping her for a short time.

“Lots of people do transports all of the time,” Killough said. “The Humane Society has them coming in all of the time and this girl was probably pulled from a shelter in Orlando and there’s a rescue group in Memphis that wanted her.”

Melly will be transported with two other puppies that will be traveling further north.

“They saw (Melly) on the Internet and pulled her from the shelter and somebody kept her until they could set up a transport and this nice young man could fill one of the legs of that transport.”

Neely said he doesn’t know much about the program, but all he knows is that he loves dogs.

“They do it all over the country with planes crisscrossing,” Neely said. “The have people on the ground that run them too. Basically, I love dogs. Some people may just drop there dog off and they don’t know about these programs.”

Killough said the Internet has helped tremendously in getting these animals adopted and transported to better lives.

“It happens every day and if anybody would like to be a part of the Humane Society’s transport, it is so rewarding,” Killough said. “There are so many dogs in shelters, in town and Humane Societies that no body knows about. It’s important because otherwise they would be euthanized. It’s like our shelter here – lots of great dogs but more dogs are brought in than people coming in to adopt them.”