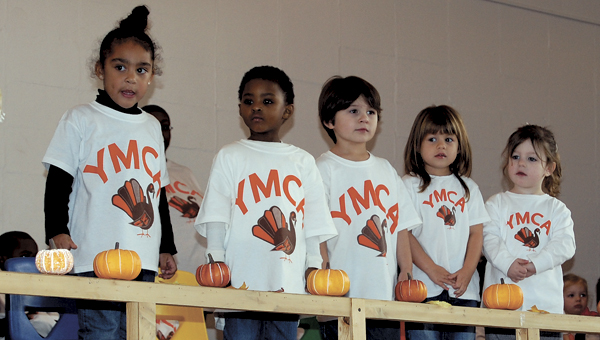 From left to right, Alissa Cook, Zach Chambers, Bryce Clifton, Ava Branson and Emma Phillips said what they were thankful for to a crowd of family and friends at the YMCA Thanksgiving Feast on Nov. 18. Advocate Staff/Patty Vaughan

The Greenville YMCA held it’s fifth annual Thanksgiving Preschool Program and Feast for the community and members of the YMCA.

Amanda Phillips, executive director of the YMCA, said the preschoolers put on a program as well as do a play with pilgrims and Indians.

The children sing to a crowd of parents and friends and also state what they’re thankful for this Thanksgiving.

Because the children range in ages 18 months to four and half years old, Phillips said they have to start planning way in advance.

“We start tomorrow for next year,” Phillips said. “It takes a wile especially with this age to start planning for it.”

The team of children rehearse every day in the morning from 9-9:45 a.m.

“We have had a few over the year when they opened the curtain to see their parents they just go ballistic,” Phillips said.

After the singing, production and program, the community and families are invited to a traditional Thanksgiving feast hosted by Super Foods.

Because the Y is a community organization, it’s a good opportunity to come be there for the children.

“I just think that the YMCA is a community organization and the children are the future so I think it’s very important for the community to support our children,” Phillips said.