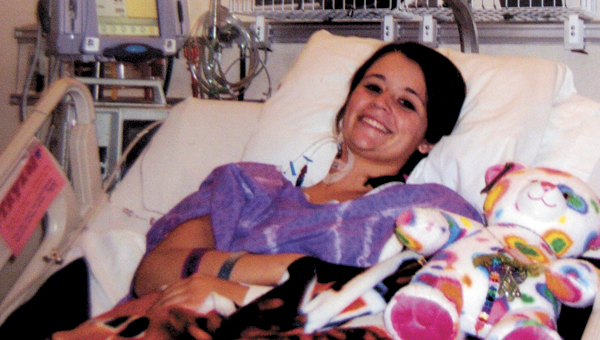 Taylor Merry, a junior at Fort Dale Academy, was involved in a serious one-vehicle accident on Oct. 22 that left her with extensive injuries, including a dislocated hip, a broken arm, a crushed L1 vertebrae and a fractured pelvis. (Submitted Photo)

Krissy Moore knows that she is blessed.

Her daughter, Taylor Merry, is a daily reminder. Merry, a junior at Fort Dale Academy, was involved in a serious one-vehicle accident on Oct. 22 that left her with extensive injuries, including a dislocated hip, a broken arm, a crushed L1 vertebrae and a fractured pelvis.

Since the accident, Merry has undergone multiple surgeries and is currently undergoing rehabilitation at L.V. Stabler Memorial Hospital.

“It’s a miracle,” Moore said. “Considering what she’s been through she’s doing a lot better.”

While Moore said her daughter “still has a long road ahead of her,” the news from Merry’s doctors continues to improve. Following the accident, doctors told Merry and her family that it was unlikely she would regain the use of her left leg due to the dislocation of her hip and the damage to her spine. Now, Merry is moving around with the help of a walker and doctors are predicting a full recovery within a year.

“Every bit of news we get is better than the last,” Moore said. “It’s really been unbelievable. We’ve been so blessed.”

Moore said the support Merry and the rest of the family have received from the community has been a “huge blessing.”

“Words can’t describe how much it’s meant to us,” she said. “Everyone has helped so much. It’s been amazing. I don’t know how we would have done it without everyone.”

Fort Dale Academy, led by the junior class, has helped raise funds to offset the family’s expenses. Merle Norman also donated 20 percent of its sales from Nov. 1-5 to Merry’s family to help with expenses.

“I want to thank everyone – my church family, my school family and the entire community,” Merry said. “The support from everyone has been amazing.”

Moore said the support from the student body at Fort Dale has been “overwhelming.”

“So many of them stopped by the hospital or our home to visit with Taylor,” she said. “You don’t think that teenagers would think like that, but they have and it’s been a tremendous support to Taylor. Everyone at the school has been great. I can’t say enough about what Mr. (David) Brantley and the teachers have done for Taylor. It means a lot to us.”

It may not be long before those same students and teachers will see Merry on Fort Dale’s campus. While her doctors have not set a timetable for her return to school, Merry is aiming to return to school following Christmas break.

“She wants to be back at school after the break, and she wants to cheer and play softball next year,” Moore said. “Those are her goals. The doctors haven’t said she can do those things yet, but that’s what she’s working towards.”

It may be a long road yet, but it’s a journey Merry is determined to make.

“I don’t think I have ever seen her so determined,” Moore said. “She’s been so strong. She’s still got a long road ahead of her and we’d just ask for everyone’s continued prayers.”

Those wishing to make a financial donation to help offset Merry’s medical expenses can do so at Whitney Bank in Greenville and Georgiana.