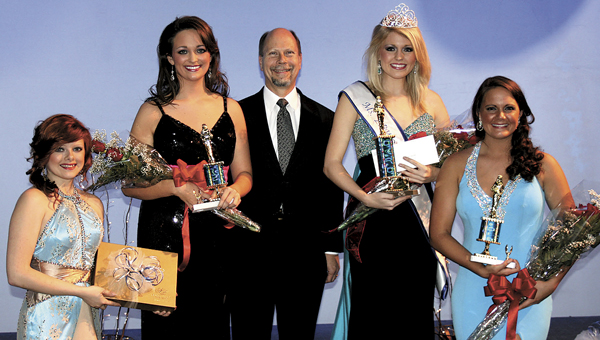 Anna Carver of Brantley was crowned Ms. LBWCC 2012 at the Martha and Solon Dixon Center for the Performing Arts on the Andalusia campus of LBW Community College.

Jessica Walker of Dozier was named first runner-up in the pageant and Anna Katherine Nelson of Georgiana was second runner-up and winner of the interview competition. Megan Maxey of Florala took the honors in the talent competition, singing “Halleluiah.”

Carver, 20, is a member of the LBW Community College Ensemble and Phi Theta Kappa national academic honor society. She is a 2010 graduate of Crenshaw Christian Academy and the daughter of Donald and Susan Carver of Brantley. Her plan after graduation is to transfer to the University of Montevallo.

Carver was voted by her peers as Ms. Congeniality, and performed a jazz routine as her talent.

Walker, 19, is active in the LBWCC Ensemble and is a nursing major. She is a 2010 graduate of Straughn High School and plans to transfer to Troy University following graduation. She is the daughter of Regina and Clint Walker of Dozier. For the talent competition, she sang “Anyway,” by Martina McBride.

Nelson, 20, is a member of the LBWCC Saints softball team.

She is a 2010 graduate of Georgiana High School and the daughter of Neal and Lynn Nelson. She plans to pursue LBWCC’s medical diagnostic sonography program, and ultimately become a radiologist specialist. She performed a classical piece on the piano in the talent competition.

Maxey, 20, is a member of the LBWCC Ensemble and is the daughter of Garry and Dianne Maxey of Florala. She is a 2010 graduate of Florala High School and plans to transfer to the Academy of Arts in San Francisco, Calif., to pursue art and home interior design.

The pageant was sponsored by the LBWCC Student Government Association.