Till inducted into Wall of Fame 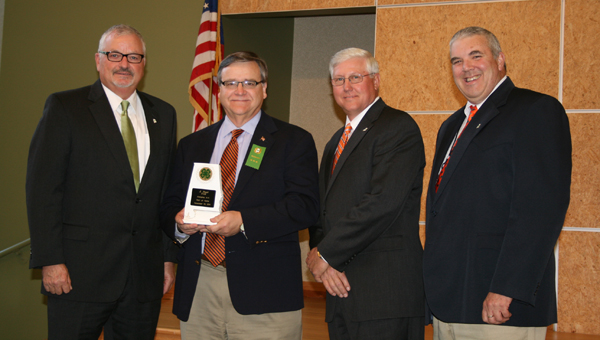 J. Paul Till, a Butler County 4-H alumnus, was one of 12 inductees into the 2011 Alabama 4-H Wall of Fame Nov. 10 at the Alabama 4-H Youth Development Center in Columbiana.  The induction ceremony and reception were held in the W. Gaines Smith Environmental Science Education Building.  Till was nominated by Ralph Thompson, retired county Extension coordinator.

Till has a degree in communication from Auburn University and in counseling from Troy University in Montgomery. He has worked for the Associated Press in Atlanta and for the Alabama Farmers Federation/Alfa, until his retirement in 2009. His roots go back to Butler County and the 4-H program under his volunteer leader Audrey Gruenwald, a 2008 inductee into the Alabama 4-H Wall of Fame.

“Without 4-H and its leaders who encouraged me at an early age, I am not sure I would have ever ventured outside Butler County, much less attended college and had a successful career,” says Till.

“I was so shy and grew up so far out in the country it was a huge deal just to go to the county seat, Greenville, for an awards program. Walking across the stage at the Ritz Theater to accept an award was about as scary and exciting as this country boy could handle. But when I was chosen to represent Alabama at the 4-H Congress in Chicago and later picked as one of four Alabama 4-H’ers to attend the National 4-H Conference in Washington, I was changed forever.”

Till’s journalism career included covering Gov. George Wallace and the return home of the POWs to Maxwell Air Force Base from Vietnam. Joining Alfa in 1975, he was the founding editor of the Federation’s Neighbors Magazine, which has the largest agricultural circulation in Alabama. He was also founder of Alfa News. The two publications reached a combined circulation of more than 400,000 homes in Alabama.

Till was promoted to director of public relations and communication for Alabama Farmers Federation and Alfa. He spear-headed the widely acclaimed Farming Feeds Alabama campaign, which featured statewide television commercials promoting Alabama agriculture.

Till remembers his 4-H involvement. “It was a long process, many 4-H speaking contests, livestock judging, forestry, safety, leadership….opportunities that were available to me nowhere but at 4-H. These were opportunities that I never would have taken without prodding and encouragement from Ralph Thompson. I am sure they don’t want the praise, but I could not say anything about my 4-H experience without giving credit to him as a 4-H staff leader and Audrey Gruenwald as my 4-H volunteer leader and 4-H public speaking coach. To them, and to 4-H, I will forever be grateful.”