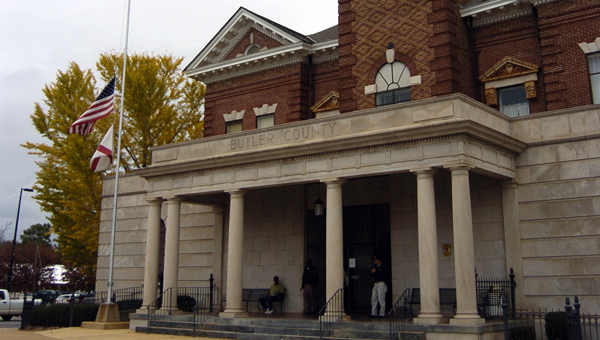 The Butler County Commission voted on Monday to lower the flags in front of the courthouse to half-mast in honor of Judge Calvin Steindorff. (Advocate Staff/Andy Brown)

Judge Calvin Steindorff, a man described by those who knew him as a quiet, confident and caring gentleman, passed away Monday. He was 86.

Calvin Steindorff in a photo published in The Greenville Advocate in 1975.

Jimmy Crum, who served on the Butler County Commission with Steindorff for 10 years, said he and the judge didn’t always get along, but that he grew to respect him over time and the two developed a friendship.

“He was a unique person,” Crum said. “If you didn’t get to know him you may not would have liked him, but once you got to know him, you’d have a different view of him.

“We sure didn’t get along at first,” Crum added with a laugh. “We’d go back and forth, but later we got along real good and anything I could do for him to help him, I’d do it. I tried real hard to never let him down.”

When it was decided that the two positions would be split, Steindorff announced his plans to retire at the end of his term. McDonald Russell succeeded him as the county’s probate judge.

“He was a mentor to me,” Russell said. “When I heard he was retiring, I went and asked him if he thought it would be a good job for me, and he encouraged me to run. We kept up over the years serving in the Lions Club together and talking shop about woodworking, and I always enjoyed our time together. It was such a shock to hear that he had passed. He was a great man and he always had Butler County in his heart.”

Frank Hickman, an attorney and Butler County commissioner, said he would find it hard to believe that there could be a “nicer gentleman in public service” than Steindorff.

Prior to serving as probate judge, Steindorff was appointed the county’s tax assessor in February of 1947 by Gov. Jim Folsom. He was reelected to that office five times.

“Judge Steindorff was a good citizen and a good friend of Butler County,” said Jesse McWilliams, Butler County Commission chairman. “This is certainly a loss for our county.”

Williams and the Butler County Commission voted on Monday to lower the flags in front of the courthouse to half-mast in honor of Steindorff.

Dunklin and Daniels Funeral Home will be directing the funeral services. Arrangements have not yet been finalized, but will be published when they become available.