Pickens County holds on against Brantley 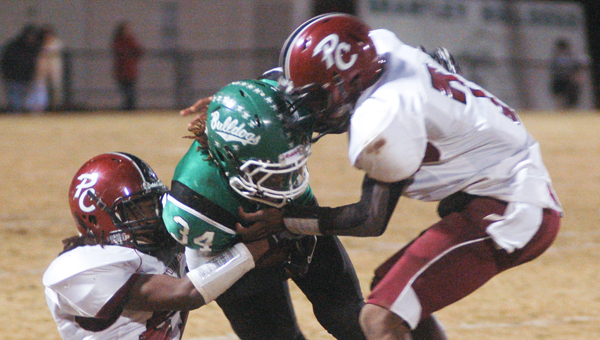 Running back Andrew Parker gets double-teamed by the PCHS defense.

In a surprisingly defensive struggle between two teams averaging over 42 points per game, Pickens County topped Brantley 14-12 in the second round of the playoffs on Friday night.

The Bulldogs struck first with a 35-yard pass from Andrew Lowery to Reed Kilcrease, but Pickens County answered with a touchdown drive to make the score 7-6.

That’s where the score stayed until the fourth quarter.

Pickens County mounted a drive, but the Brantley defense held them to fourth down and eight on the Bulldog 30-yard line with 9:03 to play in the game.

The Tornados successfully drew the Bulldog defense offside twice in a row to pick up a first down and continue the drive, which ended in a touchdown.

Throughout the night, Pickens County had kept Brantley running back Andrew Parker in check, but Parker got loose at a key moment for the Bulldogs.

With five minutes left in the game, Parker got the carry on fourth down and one from the Pickens County 30-yard line and raced 20 yards.

The drive stalled, and three plays later the Bulldogs again faced fourth down, this time from the PCHS 10-yard line.

Taylor Tew ended up with the ball following a reverse, and he threw a strike to Clint Kilcrease in the endzone to cut the score to 14-12.

The two-point attempt came up short, and Pickens County recovered the onside kick with just under three minutes left to play.

The Tornadoes picked up two first downs to finish the game and run out the clock.

“We had a number of penalties that killed us, and we just didn’t play smart at times,” said head coach David Lowery. “We played as hard as we could against a big, athletic team.”

The Bulldogs end the season with a 9-2 record and will lose 12 seniors.

“They’ve done a great job this year with stepping up, and the whole team has been a great group of kids,” Lowery said.