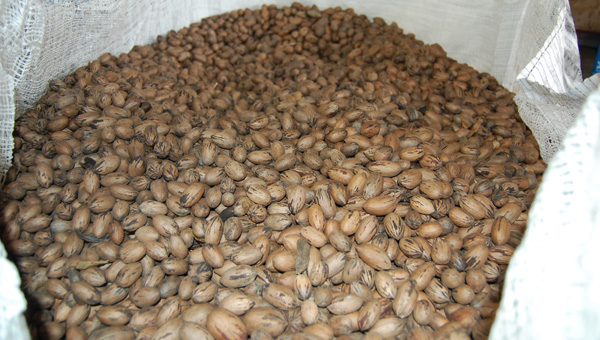 Pecans are selling for a high price right now due to a high demand in the market and places like Priester's Pecans and Lewis Pecan Co. couldn't be happier.

For those who are wondering why people are picking up pecans with buckets, bags and burlap sacks, the question is simply answered by seeing the dollar signs in the market next to the word, pecan.

Pecan season is upon Butler County once again and it’s a race to the finish line of who can collect the most pecans.

For store co-owner, Terry Gantt with Lewis Pecan Co., the season has been bountiful.

However, due to the flooding of the market, the prices have gone down to between 90 cents and $1.25.

“People bring in pecans anywhere from an 80-pound Kroger sack to a five-pound bucket to Walmart bags,” Gantt said. “Really, anything they can put them in, and we sort through them and we decide what they are whether they’re seedlings or Stuarts or Elliots. There are just a variety of pecans.”

According to Stinson Ellis, one of the shelling plant supervisors at Priester’s Pecans, the high selling price for pecans is coming from a high demand from China.

“The Chinese are big in the pecan industry right now,” Ellis said. “Their middle class is growing so they’re reaching out there and buying more and more products from the U.S. They’re influence added demand and has brought the price up, which is why you’re seeing the yard crop that people are picking up and selling. They’re paying a little bit more for them than in the past.”

For the Chinese, pecans play a huge role in the Chinese New Year, which will be on January 23. For the past three years, pecans have been a large import to China from the U.S.

“The pecans have to be on a boat headed to China a month before the New Year for them to get there and get into circulation,” Ellis said. “What the Chinese do to them to for the most part, typically, the Chinese crack them by hand, soak them in a soy sauce or secret family recipes, dry roast them in an oven and then take them and weigh them out and sell them on the streets.”

Priester’s does not buy pecans from the community but rather gets its pecans from groves in South Alabama and Georgia. The shelling plants shell about 20,000 to 25,000 pounds per day.

“Priester’s has been really good at acquiring some of the best pecans that they offer for sale,” Ellis said. “We wind up paying the higher prices for what we get because they’re some of the better pecans on the market. We try to buy best the pecans to make the best candy.”

For Lewis Pecan Co, as of Thursday, it will have been open for four weeks and has purchased more than 160,000 pounds of pecans. It sees between 100 and 300 customers daily and will continue to be open through January.

Gantt said he’d take any amount pecans from anyone.

“Whether they bring me one pound or 1,000 pounds, I’ll buy them,” Gantt said. “People say they wish money grew on trees. Well, it does for three months out of the year. When it falls and hits the ground, basically all you have to do is pick it up. You go out and pick up 100 pounds of pecans in a couple of hours, you just made $100.”