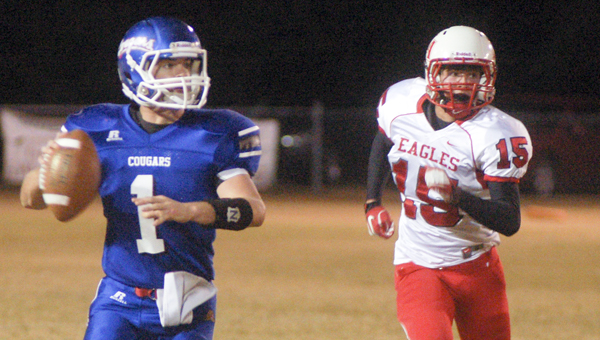 Quarterback Gunnar McCollough rolls out and looks to make a pass.

For the second year in a row, the Jackson Academy Eagles ended Crenshaw Christian’s playoff run.

Despite a final score of 40-14, the first quarter of the game was a back and forth battle, with neither offense being able to move the ball.

However, the Eagles slowly swung the field position and scored with 6:35 to go before halftime.

A short punt, long return and a personal foul put Jackson in business at the CCA 13-yard line on their next possession, and with 3:35 left in the second quarter, the score became 14-0.

The Cougars had a chance to take that score into the locker room, but a 33-yard pass found its mark in the endzone as time expired in the first half to make the score 20-0.

“We gave them a short field in the first half, and we had some penalties that hurt us,” said head coach Roland Jones.

The Cougars were also unable to turn it around in the second half.

Austin Brown caught a 21-yard touchdown pass from quarterback Gunnar McCollough with 6:13 left in the third quarter, and Will Moses scored on a one-yard run with less than a minute to play in the game, but Jackson won 40-14.

“We just got outmanned,” Jones said. “They were bigger, faster and stronger.  We had to play perfect assignment football, and we didn’t do that.”

The normally potent CCA rushing game was held to 127 yards on 37 carries, while McCollough threw for 42 yards through the air.

Moses and McCollough each had 48 yards rushing, while Chris Wooten added 15 yards, Gavin McKenzie had 13 yards and Shaun Lewis had three yards.

Brown was the team’s top receiver with 32 yards, and Lewis also caught a pass for 10 yards.

Defensively, Brown led the team in tackles with 10, while Lewis was close behind with eight, including one sack.

The loss ends CCA’s season with an 11-1 record.

“We had a good year, and we played hard,” Jones said.