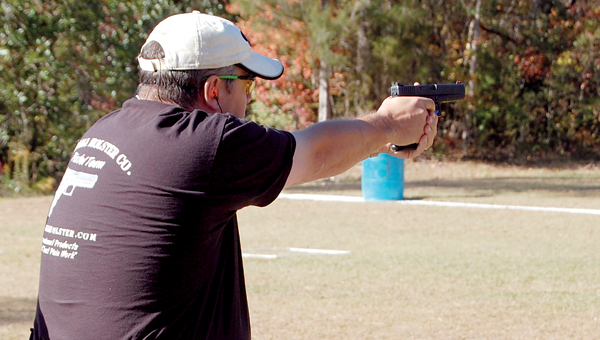 The third annual Steel Pistol Challenge took place Friday as law enforcement teams from across the state competed for plaques and prizes.

Hosted by the Greenville Police Department’s Special Response Team, the event is a way for law enforcement teams to bond, have fun and train all at the same time.

“This is just a way to get other officers from other departments down for the day to shoot, compete and have a fun day as well as a training day,” Capt. Randy Courtney said. “Anytime you’re shooting and going through a course handling your weapon, that’s training”

“They’re just different courses that I set up, and I put names to all of them,” Courtney said. “The first one was five targets at different distances with the farthest being 35 yards and the closest being 18 yards. I designate one of the plates as a stop plate, which they have to hit last, which stops their time. If they hit the stop plate before they hit the other four, it’s a 10-second penalty.”

Nathan Lane from the Homewood Police Department won the first and third event and Terry Mason from the Elmore County Sheriff’s Office won the second event.

There was a first, second and third place plaque given for each course and the first-place winner received a $50 certificate to Gulf States Distributors in Montgomery.

At lunch, the sponsors of the event got to participate in a Sponsor’s Shoot.

“I give them time to come down on the range, and we have a sponsor shoot,” Courtney said. “We had a bunch of folks shoot in the sponsor shoot, and whoever has the best time on that gets a sponsor plaque.”

After the three events, the first, second and third place winners of the events got the opportunity to participate in the Top Gun competition. Courtney set up a course where the winners had to run and shoot targets.

“We had six that shot in the Top Gun, and that’s for the overall top gun of the day,” Courtney said. “Nathan won that and he won top gun plaque, a steel target from Action Targets worth $150, he won $500 night vision goggles, and he won a tactical bag and $50 certificate to Trojan Tactical.”