Time in service ‘a big picnic’ 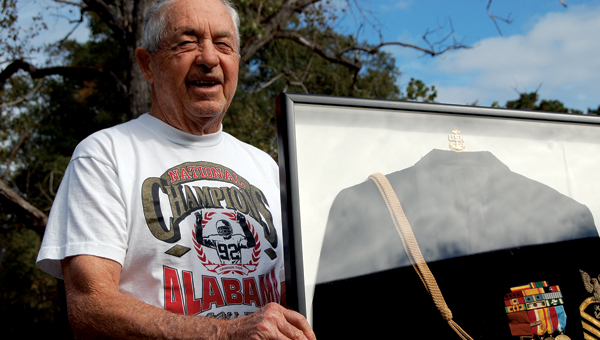 Butler County resident Robert Senn served in the U.S. Navy for more than 20 years and cruised to Korea and Vietnam. Senn displays his Chief Boatswain’s Mate uniform that his daughter framed for him. (Advocate Staff/Patty Vaughan)

Robert Senn said his 20 years, one month and two days in the Navy was really just a big picnic.

After entering the Navy at 17 years old, Senn worked on three aircraft carriers, a seaplane tender and the last five years he served on a cargo ship.

“The last ship I was on, I was in charge of the forward half of the ship,” Senn said. “I had 64 people working for me when I retired.”

For most people with a full education, it took about 12 years to receive the rank, Chief Boatswain’s Mate. However, for Senn, he only had an eighth grade education, but made the rank in 18 years.

After working in saw mills growing up, Senn had never completed a pushup or pull-up in his entire life until he reached boot camp. He said he gained 16 pounds in boot camp and only weighed 119 going in.

When he was a lower rank, and worked on the aircraft carriers during the Korea War, he said his job was a mix of things.

However, to call his time a picnic, Senn’s last job was delivering food and supplies to aircraft carriers.

“My best was my last five years in the Navy,” Senn said. “I was on the cargo ship and whenever a ship needed groceries, we replenished them. On one cruise, in two weeks, we replenished 92 ships.”

Senn said his crew broke the record with loading 416 tons of cargo per hour from one ship to another. He said most cargo ships only hold about 160 people, but most aircraft carriers can hold between 5-7,000 people.

“We replenished a ship one time the day before we went to Hong Kong for a week,” Senn said. “The next day she caught fire and killed 45 pilots.”

For Senn, he did not fight in the fights like ground troops. His job was mixed with a variety of activities, but said he was always on guard.

“My main job was to see the ship and boats and I was a jack of all trades as you could say,” Senn said. “Every situation has a different meaning. If you shoot a gun, you shoot a gun.”

Senn is the senior vice for American Legion and participates at Post 157 in Gantt, Ala.

“We do charity work, not necessarily for the veterans but also for the community,” Senn said. “The last two things we‘ve done is give a scholarship to a girl to go to Alabama and we sent WWII veterans to Washington, D.C. Whatever we make goes to charity.”

As for this Veteran’s Day, he said it all depends on what his close group of friends will be doing at the Senior Center in Honoraville, Ala.

“It depends on this place right here,” Senn said. “These people are wonderful, and we are a tight knit crew. I’m the substitute driver for Meals on Wheels here plus the garbage man. I enjoy this place up here and I know most of them enjoy me. If I don’t show up, these ladies get on me big time, but maybe it’s just because I take the garbage out.”