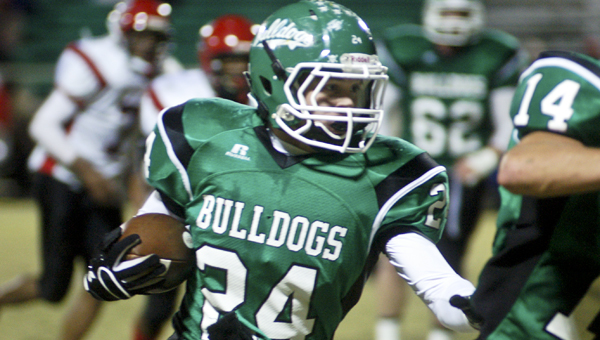 Zeth Johnson had a solid night for Brantley against Loachapoka.

The Brantley Bulldogs rolled to a 41-0 first-round win over Loachapoka Friday night.

Loachapoka’s defense made an early stop when Jywon Moss intercepted a pass from Brantley’s Andrew Lowery on the Indians’ seven-yard line to end Brantley’s first drive.

However, Brantley’s defense clamped down on the ensuing possession, and Loachapoka was forced to punt from inside their own five.

The Bulldog offense found its groove despite a number of false start penalties as Brantley got touchdown runs from Andrew Parker, Zach Wiley and Zeth Johnson.

Lowery connected with Jared Wiley for a 32-yard touchdown pass with just over two minutes to go in the half to put Brantley ahead 28-0 at the break.

Brantley’s defense was also stout as the Bulldogs didn’t give up a first down without the aid of penalties until late in the second quarter.

In the second half, the Indians held Brantley to two touchdowns.

Brantley’s Reed Kilcrease scored with 5:16 to play in the third quarter, and an interception by Jared Wiley led to Parker punching in another score less than four minutes later.

The Loachapoka offense showed some life late in the game, but the game was well out of reach.

“Andrew Parker has had some injury problems this year, but when he’s healthy, he’s good,” said head coach David Lowery.

Loachapoka has had some turmoil at the end of the season, and the Indians forfeited last week’s game against Lanett when head coach Jerome Tate took his team off the field just before halftime.

Lowery said he didn’t think his team was overlooking the Indians because of those problems.

“I was more concerned about us after playing hard against Linden and coming up short,” he said.

Despite the 41-0 win, Lowery said one of the biggest issues his team needs to address is penalties.

“We’re just shooting ourselves in the foot with penalties, and that’s a major problem we’ve got to work on before next week,” he said.

The Bulldogs will host Pickens County next week in the second round of the playoffs.