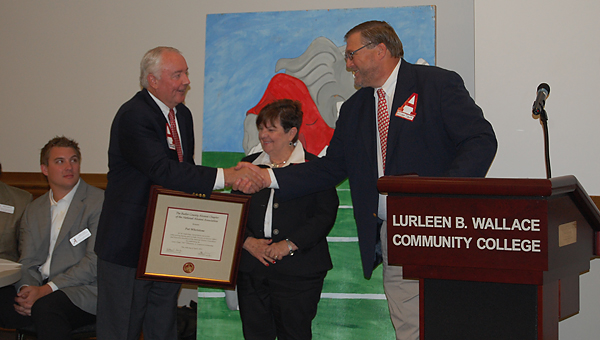 The two-time All American at Alabama told stories that ranged from how he first fell in love with football, to coach Bear Bryant’s last words spoken to him, to how he got kicked out of a football game as a New England Patriot.

“I just want to tell war stories,” Hannah said. “If they wanted to go get something serious, the should go to church or hear a political speech. It’s always great that people want you to come and be a part of a group. I think it’s more special now with what coach (Nick) Saban has done at the school and the kind of talent he has brought in. He’s put us on the map again.”

Hannah’s most memorable moments at Alabama were times spent with his buddies.

Along with hearing Hannah, a nine-time All-Pro selection and NFL Hall of Famer, share his “war” stories, the chapter also announced a new name added to a scholarship awarded to Butler County students attending the University of Alabama.

Pat Whetstone was added to the Lewis Clyde Pat Whetstone, Jr. endowed scholarship in April 2011 but it was officially announced at the meeting.

“We wanted to do this tonight because this is a scholarship for Butler County students from Butler County and a scholarship that is endowed in perpetuity from now until the university is no longer in Tuscaloosa,” William Davis, chapter president, said. “The plaque says ‘The Butler County Alumni Chapter of the National Alumni Association honors Pat Whetstone for his leadership, commitment and service while serving 20 years as both director of Alumni Affairs and executive secretary of the National Alumni Association by establishing the Lewis Clyde Pat Whetstone Jr., endowed scholarship.’”

Pat Whetstone said he had a lot of nice things happen to him in his victory lap before he retired, but this was the nicest.

“I am so honored to have this scholarship in Butler County named for me,” Whetstone said. “I’m glad that my name will continue on in this county. My very first chapter meeting 20 years ago when I was director was here in Greenville at Beeland Park. I’m retired so this is my last chapter meeting.”

Two $1,000 scholarships were given to two Butler County students. Sarah James and Karli Boulware are freshmen and the recipients of the 2010-11 scholarships.

“Each girl got $1,000 and they’ve represented your county well,” Vivian McGowin said. “It really makes a difference to these families and these children work awfully hard, and I hope we can continue to grow our scholarship funds and help more students from Butler County.”