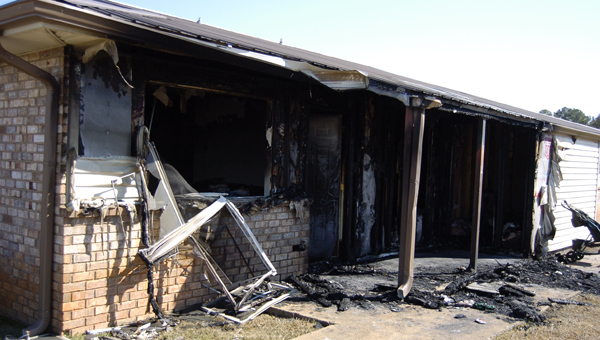 The Alabama Fire Marshal’s Office and the Greenville Police Department are investigating a pair of fires that authorities believe were intentionally set at two different locations within a Greenville apartment complex.

At 3:30 a.m.  Saturday, the Greenville Fire Department responded to a call at Greenville Terrace Apartments on North Conecuh Street. After arriving on the scene, firefighters found two separate buildings ablaze.

“The first building had a part of a unit that was fully involved when our units arrive,” Greenville Fire Department Chief Mike Phillips said. “They got those fires out.”

Each building at Greenville Terrace Apartments consists of four units.

According to Phillips, there was smoke damage and light water damage to the surrounding units.

The first unit was completely vacant but the other building was occupied. The residents of the building were able to escape without injury.

“It was just very unusual to have two fires start in different places at the same time,” Phillips said. “We arrived and one building was on fire and the next building was also on fire. That was pretty suspicious in itself.”

The State Fire Marshall and the Greenville Police Department are conducting a joint investigation.

“It’s very preliminary, and the investigation won’t be completed for another two days,” said Steve Holmes, public information officer for the Fire Marshal’s Office.  “They do have some leads and we are in fact investigating it.”

According to Lt. Justin Lovvorn, authorities do have a suspect in the case.

“We’re pursuing a suspect,” Lovvorn said. “At the moment we don’t have enough for an arrest, but we’re following a few leads and seeing where they go.”