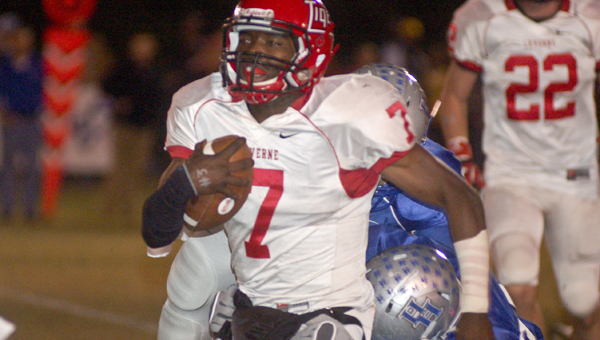 Despite being plagued by turnovers, the Luverne Tigers pulled off a convincing 41-21 win over Highland Home on Friday night.

Tige Townsend got things started for Luverne with a 20-yard touchdown run with 8:22 left in the first quarter, and while it seemed like Highland Home would respond following a 45-yard pass from quarterback Kase Kelly to Raheem Berry, the Squadron’s drive stalled at the 16-yard line.

John Dunn got the ball back for Highland Home with an interception, but the Squadron were unable to move the ball.

Luverne’s Jamarcus June broke a 40-yard run to open the second quarter, but a fumble that was recovered by Dunn ended the Tigers’ drive.

The defense stood tough for Luverne, and specials teams made a play.

Following a punt, Ladorian Jackson took the return 51 yards for a touchdown to put Luverne up 14-0.

On the Tigers’ next possession, a long reception by Kentarius Womack and an 11-yard run by Jackson put Luverne ahead 21-0.

It looked like the Flying Squadron were prepared to mount a comeback after Kelly hit Berry for a 38-yard touchdown pass down the right sideline, but the Flyboys’ momentum was short-lived.

Luverne’s Toddrick Oliver returned the ensuing kickoff 40 yards, and June took the first play from scrimmage 40 yards for a touchdown with 1:59 to go until half.

“I felt like that was one of the turning points of the game,” said Luverne head coach Les Sanders. “We were picking them up and opening some running lanes. Our line did a great job of blocking all night.”

Not to be outdone by the offense, defensive lineman Quindarius Thagard got a hand in the way of one of Kelly’s passes, tipped the ball up in the air and to himself, then raced 50 yards to put Luverne ahead 35-7 with just under 25 seconds to go until halftime.

In the second half, Jackson added a 25-yard touchdown run for Luverne, while Kelly found Berry for touchdown passes of 68 and 13 yards.

The Tigers had a number of turnovers, but each time, their defense held tough.

“We’re been throwing and catching the ball as well as we have all year, and we did a good job of controlling the line of scrimmage,” Sanders said. “We knew that Highland Home had some great athletes, so we expected to give up a few points.”

“The game is won and lost up front, and Luverne just did a great job,” said Highland Home coach Tom Pinkston. “We played a lot better in the second half, and that was when we came out and played hard.”

Both teams are playoff-bound next week.