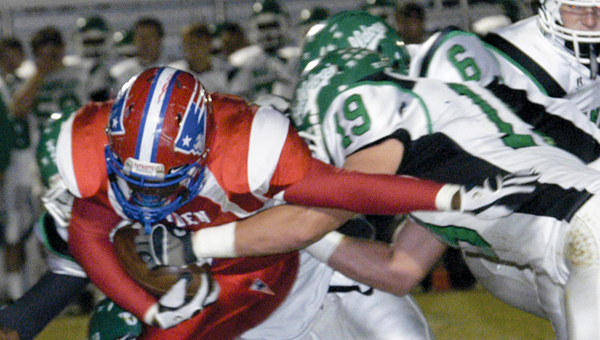 Linden (9-1) paired one offensive touchdown with a suffocating defensive effort to beat Brantley (9-1) 15-6 at Tiger Stadium in Demopolis Friday night.

The Patriots, ranked No. 1 in the Alabama Sports Writers Association Class 1A poll,  amassed only two first downs in the first two quarters of play as the Bulldogs, No. 2 in the ASWA Class 1A poll, consistently beat Linden’s offense to the edge.

Each team held the ball four times in the first half and took a scoreless tie into the locker room at intermission.

Linden began to steal the momentum on the opening kick of the second half when Jalen Lewis caught the ball at his own 8 and cut through a slew of Brantley tacklers on his way to the Linden 38. The return ignited a previously stagnant Linden offense.

“That was huge,” Linden head coach Andro Williams said of the return. “We talked about coming out and getting some points to start the second half. That gave us what we needed to get it going a little bit.”

The Patriot offense popped on three straight running plays, showing an option look previously absent from their play calling set. After pushing the ball as far as the Brantley 31, the Patriots’ appeared to be stalled after a holding penalty.

Marquis Shelton then reeled off a nine yard run to make the down and distance more manageable. On the next play, Shelton extended his left arm to make a one-handed snag while running a straight route down the middle of the field. The catch put Linden at the Brantley 11.

Three plays later, Linden sent its field goal unit onto the turf and watched Ryan Preston convert a 27-yard kick to put the Pariots up 3-0 with 6:26 to go in the third quarter.

After the Linden defense forced a three-and-out, Julian Little took a 2nd and 7 carry around to the right side before bouncing back to his left and sprinting 60 yards for a touchdown.

“It was a hole, so I just cut back and ran toward daylight,” Little said of the carry.

“We just got on some blocks,” Williams said of what led to the run.

The Patriots missed the extra point, leaving the score at 9-0 with 3:14 left in the third quarter.

Six plays later, Robinson picked off an Andrew Lowery pass, bolted to his right and shifted back around the Bulldog offense, carrying the ball 46 yards for an touchdown to leave Linden with a 15-0 lead with 1:24 to play in the third quarter.

The teams traded punts in the fourth quarter before Brantley embarked on a nine-play, 61-yard drive that was highlighted by a 37-yard pass from Lowery to Reed Kilcrease and ended with a touchdown on a one-yard keeper by the signal-caller with 1:47 to go in the game.

The Bulldogs’ extra point sailed wide left and the ensuing onside kick landed in the possession of Ryan Preston to ice the game.

Little led the way for the Patriot offense, rushing 11 times for 94 yards, finding running room despite having new faces along the offensive front.

“Offensive line did great,” Little said of a group that was without one of its senior starters due to injury and was forced to turn to customary defensive lineman Kevon Rembert to fill in. “Kevon adjusted well. He is one of the players of the week for taking one for the team.”

Linebacker Terris Lewis led the way for the defense with 13 stops. Chris Rogers and Robinson each had eight stops. Little recorded five tackles while Preston had four stops and a sack.

Linden will host Autaugaville in the first round of the AHSAA Class 1A state playoffs while Brantley hosts Loachapoka.