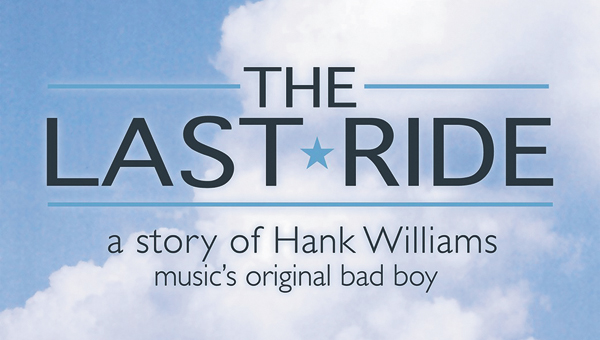 "The Last Ride" opened with a limited release Friday. Montgomery was one of seven cities in which the film debuted. It was also shown in Shreveport and West Monroe, La. and Rogers, Fayetteville, Fort Smith and Little Rock, Ark. (Courtesy Photo)

It ended in the back of a 1952 powder blue Cadillac somewhere near Oak Hill, W.Va., on the way to a New Year’s Day show in Canton, Ohio.

Director Harry Thomason has attempted to provide a glimpse into the final days of the country music superstar’s life in his film “The Last Ride.” The movie, which was filmed in Arkansas, portrays a fictional storyline based on real events of the last days of Williams’ life. The film focuses on the relationship between Williams and Charles Carr, a young man who is unaware that he is driving around a country music star.

The film, which has received the blessing of Williams’ daughter, Jett Williams, opened with a limited release Friday. Montgomery was one of seven cities in which the film debuted. It was also shown in Shreveport and West Monroe, La., and Rogers, Fayetteville, Fort Smith and Little Rock, Ark.

Edna Thomas, a member of the Hank Williams International Fan Club and a Butler County native, is anxious to see the film.

“I didn’t make the trip to Montgomery last weekend, but I read some reviews about it online,” she said. “From what I understand it’s received mixed reviews, but I’m very interested in seeing it.”

Margaret Gaston with the Hank Williams Sr. Boyhood Home and Museum wasn’t the least bit surprised a film was made about Hank Sr.

“He was a genius,” she said. “Even after all these years there are still a lot of people interested in him.”

Gaston said that she has heard from quite a few Hank fans that have shown an interest in the film.

“Fans of Hank’s are certainly aware of the movie,” she said. “From what I have heard, the acting is very good, but the characters have very little comparison to the actual people.”

In the film, Williams is portrayed by Henry Thomas, an actor best known for his role as Elliot in  “E.T.: The Extra-Terrestrial.”

Thomas said she would love to see the film come to Butler County.

Attempts to reach Edge general operations manager Michael Nimmer to find out if the theater will play the movie were unsuccessful.

Watch the trailer for “The Last Ride.”