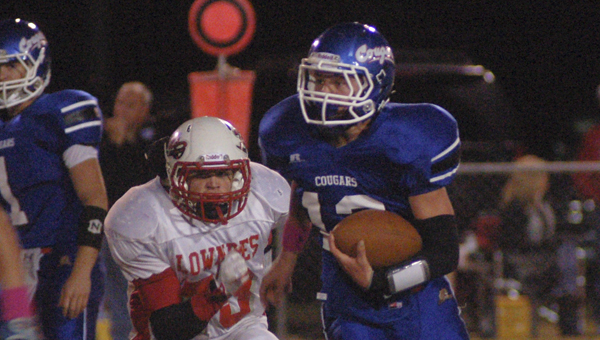 CCA's Shaun Lewis gets a carry against Lowndes.

The Crenshaw Christian Cougars put the Lowndes Rebels away early on the way to a 47-12 victory and a region championship.

The Cougars put up 21 points in the first quarter after starting their first three drives deep in Rebel territory.

Will Moses had a six-yard touchdown run, Shaun Lewis punched it in from a yard out, and quarterback Gunnar McCollough connected with Austin Brown on a five-yard pass.

CCA picked up in the second quarter where they left off in the first when McCollough hit Chris Wooten for a 45-yard touchdown pass on the opening play of the quarter to make the score 28-0.

The defense stepped up later in the quarter after Justin Fuller’s punt was down at the half-yard line.

Moses helped the defense record a safety, and on the ensuing drive, he broke a 46-yard run to put the Cougars up 37-0.

The Rebels got on the board with a 78-yard run by Garrett Headley.

A Lowndes fumble with two seconds left in the first half was recovered at the 16-yard line, and Joe “the Toe” Smith kicked a 33-yard field goal as time expired to put CCA up 40-6 at halftime.

The Rebels scored on a 15-yard pass from Hank McIntosh to Headley in the fourth quarter, but Wooten had a seven yard touchdown rush to make the final score 47-12.

“We knew this was for the region championship, and we wanted to come out and dominate,” said head coach Roland Jones. “We managed to put up 40 points in the first half and not allow a first down.”

McCollough was the team’s leading rusher with 11 carries for 76 yards, while Moses had three carries for 64 yards and two touchdowns.

Lewis had a rushing TD, and Wooten had both a rushing and receiving touchdown.

Moses also got it done on the defensive side of the ball, recording eight solo tackles and a safety.

Collin Holloway had six tackles, Nic Henderson had five tackles and Jordan Phelps had four tackles and one assist.

Smith was perfect on extra point and field goal attempts.