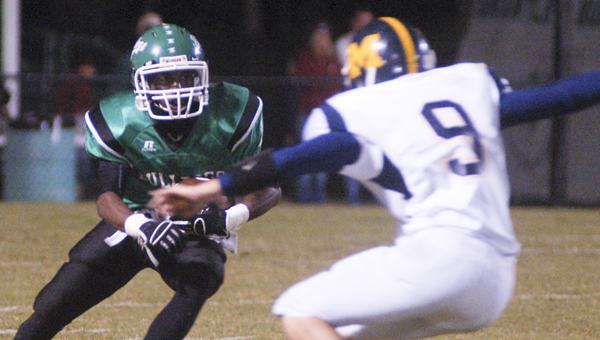 The Brantley Bulldogs jumped out to an early lead and didn’t look back on their way to a 48-6 win over region rival McKenzie on Friday night.

The Bulldogs earned touchdown runs from Andrew Lowery, Reed Kilcrease, Zach Wiley and Chester Person in the first half to take a 28-0 lead into halftime.

A tipped pass on the opening drive of the second half led to an interception for McKenzie, and the Tigers used a 45-yard pass to get inside the five-yard line and cut the score to 28-6.

However, the Bulldogs responded with a long kickoff return by Chester Person to the McKenzie 28, and several plays later, Lowery walked in untouched from 10 yards out to make the score 35-6.

Although McKenzie threatened on their next possession, the Bulldog defense held on fourth down at their own 10-yard line.

Wiley broke a 63-yard run on Brantley’s first play of the ensuing drive, and he later capped the drive with a nine-yard touchdown run.

The defense stepped up again several minutes later when Person intercepted McKenzie’s Sir Wallace Presley and returned it to the 17-yard line.

Wiley raced up the middle for those 17 yards and his third touchdown of the night to make the score 48-6.

The win moved Brantley to 8-0 on the season and clinched another region title.

“We wanted to come out and make a statement early, and we did that,” said head coach David Lowery. “We did what we wanted to do and played good football in the first half.”

The Bulldogs will face off against fellow unbeaten Linden next week in Demopolis.