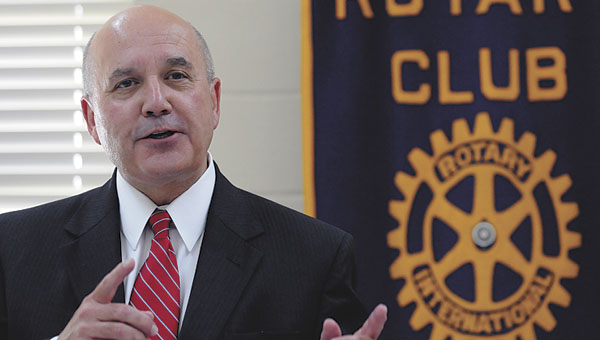 But more importantly, he wants the doors to the state’s courthouses to stay open.

Malone was appointed to his post Aug. 1 to replace Sue Bell Cobb, who resigned citing financial difficulties facing the state’s court system as one of the main reasons she decided to step down.

Malone, who spoke to the Rotary Club of Greenville and students at Fort Dale Academy on Thursday, called the court system’s financial situation his “No. 1 concern.”

“There’s no question we are facing difficult times financially and that we have got to find a way to adequately fund our court system,” Malone said.

Before leaving her post, Cobb mandated substantial cuts for all circuit clerk offices, including hours of operation and employees, in an effort to trim costs.

Butler County Circuit Clerk Allen Stephenson’s office was hit hard by the cuts. The Clerk’s Office has lost four employees since December of 2010, and has reduced its hours of operation. The office had been open to the public five days a week from 7:30 a.m. to 4:30 p.m.

Its current hours are 8 a.m. to 4 p.m. Mondays, Tuesdays, Thursdays and Fridays, and 8 a.m. until noon on Wednesdays.

“I’ve been county to county and I know the state’s clerks are working long hours to keep things running,” Malone said.

Malone says he plans to approach the court system’s financial crisis the same way he would a try a case.

“As a lawyer you present the facts to the judge so he can hopefully make an informed decision,” Malone said. “That’s what I plan to do with our Legislature. I plan to give them the information they need to make an informed, intelligent decision and hopefully they will see how important this is to our state.”

The Chief Justice said he will present a plan to the Legislature that shows how much the court systems needs and how it will use the money.

“They need to know that we’re going to be responsible for what we’re given, and we will be,” Malone said.

If the Legislature fails to increase funding for the state’s court system, Malone said he will not sue the state.

“When you’re running a business, if you don’t have enough money one year you don’t go out and sue to get more money,” he said. “You use what you have responsibly and that’s what we’ll do.”