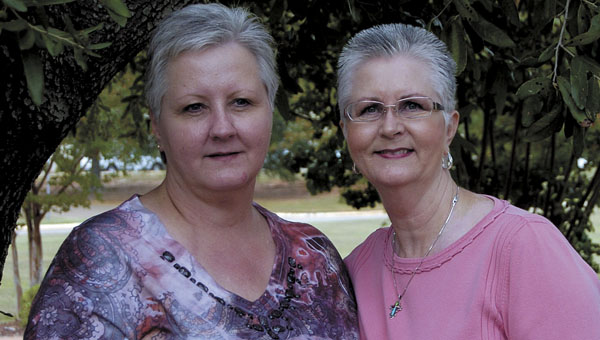 Daphne Anthony, left, was diagnosed with breast cancer Sept. 20, 2010. During her battle with cancer, Anthony received support from friends and family like her sister, Brenda Moody, right, who cut her hair short like Anthony’s as an “act of love” and support. (Advocate Staff/Patty Vaughan)

On Sept. 18 of this year, Daphne Anthony celebrated her 48th birthday, but it was no ordinary birthday. It was one more day Anthony could celebrate being alive.

“Well, when I first found out the diagnosis everything happened very quickly,” Anthony said. “I found the tumor in my breast myself and went to the doctor. He ordered a mammogram and it was strongly advised to go to the cancer center to do imaging because of the suspicions. It was a total shock because I had no family history of cancer or breast cancer that I was aware of.”

For one month, Anthony struggled mentally because she had to wait until her surgery in October to find out the severity of the tumor.

“It was like when I heard the word cancer, it was almost like translated to the word death,” Anthony said. “That was my first instinct, but knowledge is power and the more knowledge you gain, the better it is. It’s a very frightening time not knowing what stage you have or how advanced it is until you have your surgery.”

After the surgery, the prognosis was very good and things started to look up for Anthony, she said.

“Until I had that diagnoses, it was an emotional state that is indescribable,” Anthony said. “I had to have six chemotherapy treatments every 21 days, and then after that, I had seven weeks of radiation, every weekday for seven weeks. I finished radiation in March.”

Through the entire year of turmoil, ups and downs and fighting with cancer, Anthony said she has an amazing support system between her family, co-workers, friends and church family.

“I had family members and co-workers and friends that alternated going with me to doctor’s appointments and chemo treatments,” Anthony said.

One person who showed their support with more than just words was her next-door neighbor and sister, Brenda Moody.

When Anthony was about to go through Chemotherapy, she had her hair cut. To honor her sister, Moody cut her hair right along with her sister.

“It was an act love it wasn’t for show,” Moody said. “I felt like I could, in the traumatic stage of her actually to losing her hair, at least share that experience with her. I felt like when I did that, it would just show her that I would go with her, and I would be there in any way that I could. That was just one little thing that I could do to show that I loved her that much.”

Sixteen years ago, the family became extremely close after their brother was diagnosed with leukemia, Moody said.

“Our family, at that time, grew really close through that experience, but time washes that away, so her life has always been a blessing to me, because I was 10 years old when she was born” Moody said. “She has always been very special, but there’s not doubt that a trial like this brings you closer together.”

One year later, Anthony is still taking injections for cell growth, and she will continue the injections until November. She has been deemed a cancer survivor but not cancer free.

“I think having cancer changed my life completely,” Anthony said. “I look at life differently now. I don’t take anything for granted, and I’m proud of each day that I’m given. I felt like I was spared by catching this cancer early and being able to receive the treatment I needed. I believe it was for a purpose, and I’m waiting to see what that purpose is.”