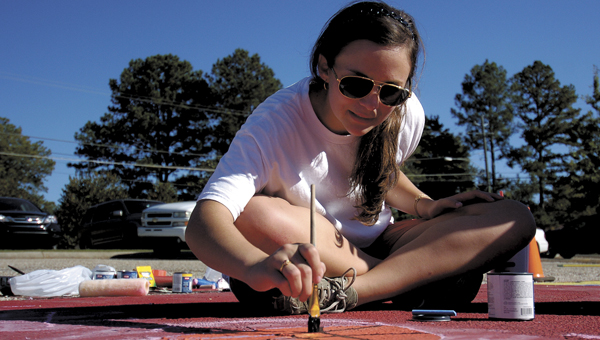 Forty-four seniors at Fort Dale Academy are continuing the longstanding tradition of painting their parking spots.

The Class of 2012 will unveil their creations this week as part of the school’s homecoming festivities.

“I like it because it’s something only seniors get to do,” Elizabeth Anne Nordgren said. “As you’re working on it in the summer, it’s kind of sinking in that you’re finally a senior.”

Nordgren is painting a heart and Volkswagen Beetle because that’s the car she drives.

Lauren Lewis, who is painting a Ralph Lauren Polo logo on her spot, is excited about Friday’s unveiling.

“I’m looking forward to homecoming when all the little kids walk by and look at our parking spots, and we’re standing in front of it and they’re like, ‘Oh, that’s where she parks,’” Lewis said.

Some seniors, like Tyler Millo, wanted to do something to really identify himself.

“I’m doing the Meerkat Manner sign because the meerkat has been my nickname since 10th grade,” Millo said.

Many of Fort Dale’s seniors began painting their parking spots during the summer and have spent the last week putting the final touches on their creations.

Matt Langford, a senior painting his parking spot with a cross, said he started in the summer.

“We usually have a group effort,” Langford said. “It would be pretty lonely to paint by yourself. You have something that’s yours and personal, and you get to put whatever you want on it so if you wanted to be funny or have a purpose.”

Marcia Davis, the senior sponsor, said the spots have to be appropriate, show school spirit and portray a part of the student’s personality.

“They have to hand in a sketch the end of the school year their junior year, and it has to be approved by the teachers,” Davis said. “I would say that they look forward to it.”