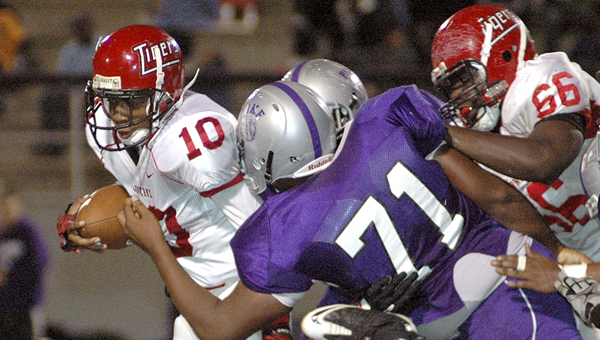 The Luverne High School Tigers used a powerful rushing attack and a strong defense to shut out the Pike County High School Bulldogs, 33-0, in a 3A, Region 2 clash before a huge Homecoming crowd at Bulldog Stadium Friday night.

With the win, the Tigers (5-3, 4-2) clinched a state playoff berth for the 26th consecutive season and earned their fourth straight win in the series against Pike County.

Meanwhile, the Bulldogs (0-8, 0-5) suffered their 12th straight setback dating back to last season. The Bulldogs will try one last time to enter the win column in 2011 this Friday night when they host Geneva.

Things started out promising for Pike County when the defense recovered a fumble at the PCHS 35-yard line to stall the opening drive for the Tigers. The Bulldogs moved the ball to the Luverne 33-yard line thanks to the strong running of Tyshin Dawson and Raheem Pearson.

Facing fourth-and-inches at the Luverne 33-yard line, the Bulldogs made a fatal error by being call for a delay of game penalty. On the fourth-and-six play, quarterback Marlon Meadows threw an incomplete pass. As a result, the Bulldogs turned the ball over on downs.

Luverne immediately responded by marching 62 yards in 11 plays taking off 5:46 of the clock. Running back Jamarcus June scored from one yard out. The key plays of the drive were four-yard run by Quez Redman on third-and-three and an 11-yard run by June on third-and-four. The missed extra point left Luverne with a 6-0 lead at the 11:14 mark of the second quarter.

Following a Pike County three-and-out, the Tigers’ offense wore the thin Bulldogs’ defense down with an 11-play, 61-yard drive. The drive ended when Tyge Townsend threw a seven-yard scoring pass to June on a third-and-five play. The missed two-point conversion left Luverne with a 12-0 lead at the 3:19 mark of the first half.

The Tigers struck threw the air right the half when Townsend found June down the left sideline for a 33-yard scoring strike. The successful extra point extended Luverne’s lead to 19-0 at intermission.

The Tigers scored two second-half touchdowns on a three-yard run by June and a perfectly executed 11-yard quarterback draw by Townsend for another score.