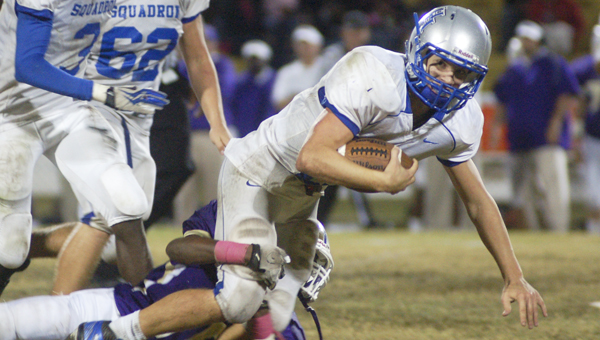 With a 36-24 win over Goshen, the Highland Home Flying Squadron locked up a playoff berth for the first time since 2007.

The game started off with fireworks for both teams.

Highland Home’s John Dunn took the opening kickoff 95 yards for a touchdown to put the Squadron up 6-0.

Less than 20 seconds later, Goshen returned the favor with a 90-yard kick return for a touchdown to take a 7-6 lead.

The rest of the first half was back and forth, with Dunn taking a handoff from quarterback Kase Kelly and then stepping back to find Raheem Berry for a 15-yard touchdown.

Goshen responded with a 32-yard touchdown run on fourth and one to go up 14-12.

Despite a 79-yard run on Goshen’s next possession, the Highland Home defense held the Eagles to a 38-yard field goal, and the Squadron used the momentum to put two touchdowns on the board in the last five minutes of the first half.

First, Kelly connected with Berry for a 54-yard score, and then running back Lewis Johnson broke a 39-yard run with just a over a minute to play that set up a three-yard rush by Kelly.

Highland Home led 27-17 at the half, and both defenses stepped up in the third quarter.

Goshen had the period’s only score to cut the lead to 27-24.

With their backs against the wall, the HHS defense held on fourth down and four at their own 14-yard line at the start of the fourth quarter.

From there, the Squadron ran the ball down the throat of the Eagle defense with Kelly getting many of the carries.

Kelly capped the drive with a 7-yard touchdown run to stretch the lead to 10 points.

“We had that power run working for us,” said Pinkston. “We were trying to run the clock, and we were able to execute that play well.”

Though the Squadron’s next drive stalled, a punt by Chris McCullough turned over and pinned Goshen at their own goalline with under two minutes to play.

On the first play of the drive, Darian Harris broke through the offensive line and recorded a safety for the Squadron to seal the game.

“Our defense stepped up when they had to and did a good job of getting the ball back to the offense,” Pinkston said. “Goshen has a good team with a lot of character, and this is a good win for us.”