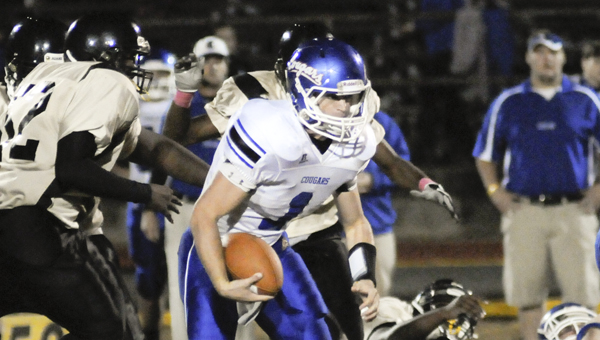 By Robert Hudson
The Selma Times-Journal

“Ellwood’s struggling and they’re just trying to build a program,” said Roland Jones, head coach of the Cougars. “We got to play a lot of kids. We just wanted to do the things that we do right, and we didn’t play our best, but we got the victory.”

Despite another tough loss, Eagles coach Mike Stokes said his young team is making strides in its first year of 11-man football.

The Cougars got going from the first play of scrimmage when quarterback Gunnar McCollough broke a 40-yard touchdown run to make the score 7-0 after the extra point with 11:34 left in the first.

After forcing the Eagles to punt, the Cougars were forced to punt on their next offensive possession, but a high snap would put the ball at the Cougar 9-yard line giving Ellwood a first-and-goal situation with 2:46 left in the first.

But penalties would push Ellwood back, and it would be the only time the Eagles threatened to score in the half.

Early in the second, McCollough would find Will Moses for a 38-yard touchdown pass on a wheel route to give Crenshaw a 14-0 lead with 9:21 left in the quarter.

The Cougars would not let up, as Shaun Lewis added a 33-yard touchdown run to extend the lead to 21-0 with 6:53 left in the half.

The Cougars would add two more scores in the half, as Lewis would score again on an 8-yard run and Gavin McKenzie would score on a 15-yard run.

Ellwood’s only scores would come on a 74-yard touchdown run by running back Dariun Glenn as time expired at the end of the third, and a 42-yard touchdown pass from Jaylen Furlow to Trevirous Shepherd late in the fourth quarter.

The Cougars racked up 375 yards of total offense on the night, while the Eagles gained 224.

Glenn led Ellwood with 149 yards on 23 carries, while McCollough led Crenshaw with 101 yards on four carries.

The Eagles will head to Harpersville next Friday to play Coosa Valley Academy, and the Cougars will be at home against Lowndes Academy.