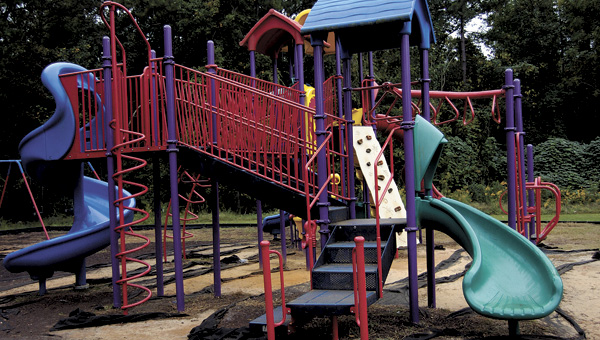 Officials with the YMCA have plans to upgrade the playground equipment and also shift its location to the north side of the pool pump house. (Advocate Staff/Andy Brown)

The playground at the YMCA of Greenville may soon be getting a new look – and a new location.

Officials with the YMCA have plans to upgrade the playground equipment and also shift its location on the YMCA’s property, which is owned by the City of Greenville. The change in location is due to the city’s plans to build municipal tennis courts on the playground’s current location.

The tennis courts are part of the $9.2 million bond issue that the Greenville City Council approved at its Sept. 26 meeting.

According to Mayor Dexter McLendon, the development of the tennis complex will allow the city to host tournaments and will in turn generate sales tax and lodging revenue.

“We’re in the process in trying to get that done,” McLendon said.

The plans to add the tennis courts at the YMCA have brought the playground’s move to a standstill, at least momentarily.

According to YMCA Executive Director Amanda Phillips, the playground should be relocated to the north side of the pool pump house within the next several months.

With the move will come repairs and new equipment.

“It’ll get all new hardware and there is another piece to add to it,” Phillips said. “There will be another climbing structure, and there will be more mulch put in the area where (the playground) sits.”