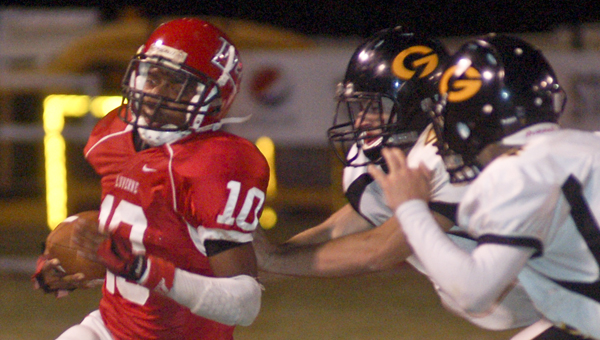 Luverne's Dontrell Hall races toward the sideline against Geneva.

The Luverne Tigers recovered from a shaky first half to claim a 41-18 homecoming win over Geneva.

The first two Tiger drives ended in turnovers with one fumble and another recovery by Geneva after a punt hit a Luverne player.

That miscue gave the Panthers the ball of Luverne’s 18-yard line, and despite a strong effort by the defense, Geneva punched it in several minutes later to take an early 6-0 lead.

Even though quarterback Tige Townsend was intercepted on Luverne’s next drive, the Tigers capitalized on a botched snap on a Geneva punt to set up shop inside the Panthers’ 10-yard line.

Townsend scored from six yards out to put Luverne up 7-6.

The Tigers returned the favor when a snap got away from Townsend on his own 15-yard line and was recovered by Geneva for a touchdown and a 12-7 lead, but that advantage would be short-lived.

Following a short kick, Townsend and the Tiger offense only needed two plays to reach the endzone for a 15-12 lead at halftime.

“We didn’t prepare well during the day and the days leading up to the game, and we couldn’t expect them to roll over,” said head coach Les Sanders. “We realized at halftime that we had to play, and we did what we had to do.”

It looked like the second half would pick up where the first half left off when the Tigers fumbled, but then the defense stepped up.

Luverne forced a Geneva fumble and Jamarcus June scooped it up and raced 55 yards for a touchdown.

Townsend added a 22-yard touchdown run in the fourth quarter to make it 29-12, and then the big plays started happening.

Kentrell Jones had an interception, and Toddrick Oliver took the first play of the ensuing drive 85 yards around the left end for a touchdown.

Geneva added a touchdown with under 10 seconds left to play, but Dontrell Hall took the line-drive kickoff over 60 yards for a touchdown as time expired.

“You know what’s at stake with the playoffs coming into games like this,” Sanders said. “You should play hard all the time. We did play well on defense and didn’t give up any big plays. The defense held us in there until we started breaking runs.”

The Tigers travel to Pike County next week for another region matchup.