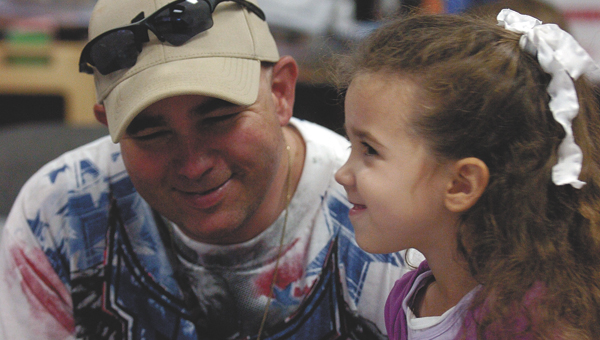 Lt. Col. Greg Kendrick has spent the last six and a half months serving in Iraq. On Thursday he dropped his daughter, Lauren, off at Bright Beginnings for the first time this year. (Advocate Staff/Andy Brown)

Lt. Col. Greg Kendrick is making up for lost time.

Kendrick, who has spent the last six and a half months serving in Iraq, started by dropping his 4-year-old daughter, Lauren, off at Bright Beginnings on Thursday, just one day after returning home.

“I feel like we lost some time, but we’ll make it up,” Kendrick said. “I just feel blessed to be back home and be with my family.”

Lauren’s classmates, who used finger paints to make an American flag and a sign that read “Welcome Home Mr. Greg,” greeted the Mississippi native with a hero’s welcome.

“This really is incredible,” Kendrick said. “That they would take the time to do this and help these kids understand what’s going on with us when we go over there is great. It shows there really is still a lot of patriotism in our country.”

Helping the students understand what it means to be a patriot is exactly what Lisa Peavy had in mind when she began including Kendrick’s service in some of her lessons.

“We’ve talked about why we say the pledge of allegiance and what it means,” Peavy said. “I really wanted them to learn to respect the flag, our country and the soldiers, like Lauren’s dad, who defend our country.”

Peavy took a globe and marked the United States and Iraq with pink stickers to give her students an idea of the distance between the two countries.

“We wanted them to be able to see how far away Lauren’s dad went for all of us so that we can be free,” Peavy said. “We’ve tried to explain to them that they can choose who to play with and where to live when they grow up because of people like Lauren’s dad, but that not everyone in every country has that choice.”

Kendrick, who has made four deployments to Iraq, said spending time in a country like Iraq is an eye-opening experience.

For Kendrick that means time with his family.