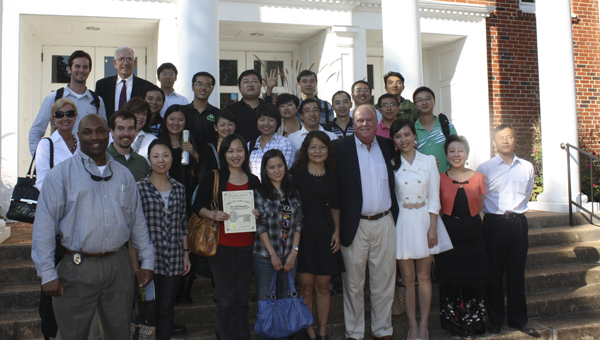 A group of 20 Chinese professionals who traveled to the United States as part of an exchange program sponsored by the Mansfield Center at the University of Montana made a stop in Greenville on Wednesday. While in Greenville, the group visited City Hall where Mayor Dexter McLendon presented each participant with a key to the city. (Courtesy Photo)

Greenville native Seth Newton was one of 10 Americans who traveled to China this summer with an exchange program sponsored by the Mansfield Center at the University of Montana.

While in China, Newton had the opportunity to visit famous cultural landmarks such as the Great Wall and the Forbidden City, all while soaking in the Chinese culture.

“It was a great experience,” Seth Newton said. “They treated us very well, and I learned a lot about the Chinese culture and made some new friends.”

On Wednesday, Newton had the chance to show his new friends the Camellia City.

As part of the exchange, 20 Chinese professionals traveled to the United States to visit Montana, Alabama and Washington D.C.

“It’s nice to have the chance to reciprocate the hospitality they showed us while in China and to be able to show them a small, southern town,” he said.

While in Greenville, the group visited City Hall where Mayor Dexter McLendon presented each participant with a key to the city. McLendon and Rep. Charles Newton held a question and answer session for the participants dealing with the city’s history and economic development issues.

The participants also toured Cambrian Ridge and Priester’s Pecans in Fort Deposit before being treated to a performance at the Ritz Theater and a “southern dinner” at the home of Rep. Charles Newton and his wife, Jan.

“It’s been a great trip,” Seth Newton said. “I think everyone has really enjoyed it.”

The focus of the exchange was global environmental issues, including natural resource development, wildlife and habitat protection, air and water quality standards and environmental degradation.

The American participants were in China for three weeks, starting their trip in Beijing, and then traveling to the largely rural Guizhou province, which has an economy based in agriculture and coal extraction.

Newton was selected to participate in the exchange for his work as an oil and gas attorney with Tuscaloosa-based Rosen Hardwood Attorneys at Law.