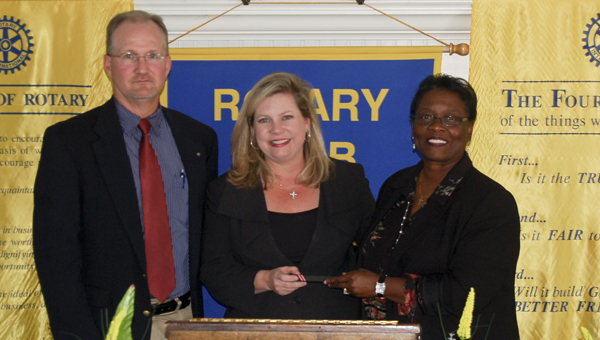 Public Service Commissioner Twinkle Andress Cavanaugh spoke to the Luverne Rotary Club on Monday and gave them a look into what the PSC does for the state of Alabama.

Cavanaugh said that while the PSC does regulate utilities to an extent, it doesn’t do any regulation in Crenshaw County.

“Alabama Power is the only power company we regulate, along with three gas companies and 29 small phone companies,” she said.

Cavanaugh said that regulation is done where a company would otherwise have a monopoly.

Cavanaugh said that affordable and reliable utilities are one of the PSC’s main goals, and that can lead to job creation.

“The government doesn’t create jobs, but we can get out of the way and make it easier for companies to come in,” she said.

One example Cavanaugh gave was ThyssenKrupp, a German steel company that established a plant in Mobile in 2007 after competition from several other states.

Cavanaugh said that one factor in Alabama’s favor was the lower utility rates the state has to offer.
Transparency in government is another of Cavanaugh’s concerns.

“We don’t take anything from regulated entities or lobbyists,” she said.

She said her office keeps a folder of receipts for money spent and that folder can be requested at any time.

“You as taxpayers gave me just a paycheck, not free football tickets and things like that,” Cavanaugh said.