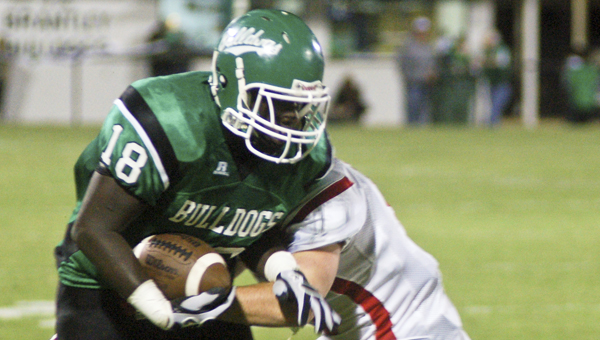 Turnovers and defense were again two keys for Brantley as the Bulldogs forced six turnovers in the first half on the way to a 49-7 homecoming victory over Pleasant Home.

“We played really well on defense,” said head coach David Lowery. “The first half was great, but we gave them one in the second half.”

After a solid punt return by Chester Person gave the Bulldogs good field position to start the game, running back Andrew Parker set the tone for the night.

Parker lowered his shoulder and ran over two Pleasant Home defenders on a 18-yard touchdown run to put Brantley up 6-0.

Toward the end of the first quarter, cornerback Taylor Tew, who had three interceptions last week against Luverne, picked off Pleasant Home’s Gabe Gunter.

Quarterback Andrew Lowery connected with tight end Clint Kilcrease on the first play of the drive for a 32-yard touchdown pass. Zach Wiley added the two-point conversion to make the score 14-0.

Brantley’s other cornerback, Terence Bogen, was not to be outdone, and he helped end Pleasant Home’s next two possessions with a pair of interceptions, one of which he returned to the 15-yard line.

Things got exciting on the PAT when the snap went over kicker Tew’s head, but he managed to recover and throw a 30-yard pass to the endzone that found Kilcrease for the conversion.

Bogen wasn’t done making plays for the defense and on Pleasant Home’s next possession, the Eagles fumbled an option exchange, which Bogen recovered.

Faced with fourth down, Lowery connected with Person for a 20-yard touchdown to make the score 28-0.

The Eagles broke a long play on their next drive that was wasted when the Bulldogs forced a fumble that was recovered by Braxton Barnes.

Lowery hit Bogen in stride and he raced 43 yards to the endzone.

Tew intercepted Gunter again on the first play of the ensuing drive, and Lowery hit Wiley for a 26-yard touchdown with 35 seconds left in the first half to make the margin 42-0.

Pleasant Home’s first first down of the game came with 12 seconds to play in the first half.

Wiley added a seven-yard run with 3:48 in the third quarter, and Pleasant Home broke the shutout with just over six minutes left in the game.

The Bulldogs had four touchdown passes in the win, and Lowery said that’s one area they’ve been focusing on.

“We’ve been working on our passing game, because the playoffs are coming, and you’ve got to be able to run and pass well,” he said.

Next week is an off week for the Bulldogs, who have an open date before the final three games of the regular season.