Phelps named Civitan of the Year 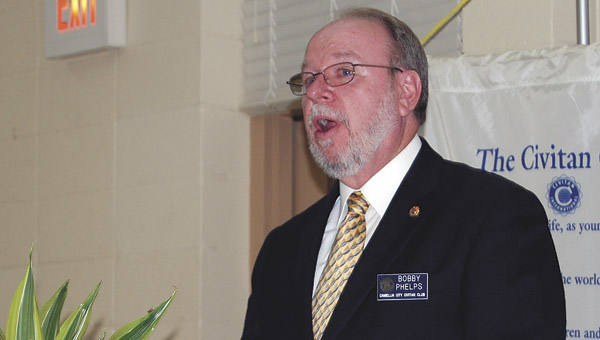 The Civitans had its annual award ceremony Monday night, which recognized new board members, inductees, and officers and gave monetary donations and awards to organizations it supports.

“We appreciate the monetary donation of the Civitan to help support this worthwhile natural resources youth camp for sixth grade students,” Paul Haudgins, a member of the Butler County Youth Conservation camp, said. “It’s been a project now for 16 years, and they’ve been behind it for many of those years. We appreciate the opportunity that they have put forward to us by helping us financially.”

A new president, president-elect and secretary/treasurer were inducted into office.

Bobby Phelps was elected as the incoming president with Lomax Owens as the president-elect. Susan Murphy will take over as secretary and treasurer.

“This means the world to me,” newly elected President Bobby Phelps said. “It’s an honor to be asked to be the president. I hope we have a great year. We’re going to try and be as successful this year as we were last year.”

Coleman could not be happier to pass his title on to someone like Phelps.

Phelps also received Civitan of the Year, which was voted by the Club’s members.

“This is the person who has fulfilled the ideas of Civitan and met the expectations of the members of the club,” Gene Autrey, a director ambassador and someone who has been with Civitan 31 years, said. “This is not an award that is volunteered for or written in the leadership manual.”

Along with new officers, new members and board of directors were added to the club.

“One thing that we’re always looking for is good, new members,” Coleman said. “I think we have some things to offer that other clubs don’t have. We have got a group of people here that will do everything they can to help you and help the community. We’re always looking for people to include in that because we know that the more member we have, the more we can do for the community and that’s our purpose.”

The new members that were inducted include Brittany Stanford, Marty Sexton and Otis Grayson. The board of directors for the upcoming year include Jimmy Russell, Connie Coleman, Mollie Waters, Jeddo Bell, Justin Pierce and Steve Davison.

“It’s been a good year, and we’ve gotten a lot done,” Mark Coleman said. “It’s made me more aware of being in service of community.

“I don’t think you reach all of your goals but we reached a lot of them and the ones we haven’t reached, we’ll reorganize and see if there’s another way to reach those goals.”