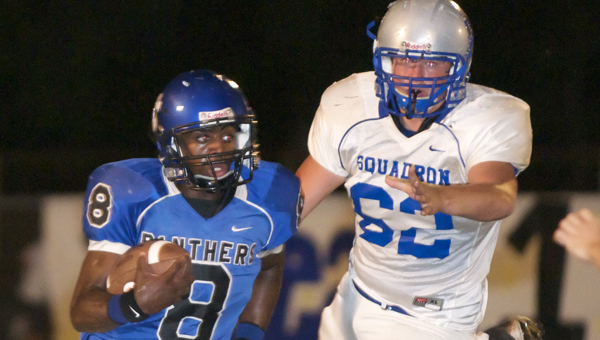 By PATTY VAUGHAN
The Greenville Advocate

After falling behind 12-0, the Panthers clawed their way back into the game with 14 seconds remaining in the first half when quarterback Ricky Everett threw a 74-yard touchdown to senior Adrian Rich making it 12-6 at the half.

After a successful onsides kick, the Panthers added another score to knot the score at 12-all. Highland Home pulled away with two third quarter touchdowns.

Early in the fourth quarter, Highland Home was able to score a touchdown in three plays making it 30-12.

The Panthers made a last-ditch effort with two minutes left in the fourth quarter by going for it on fourth-and-14. Everett ran the ball gaining 16 yards and a first down. Everett then passed the ball to Rich scoring a touchdown making the final score 30-18.

“We did what we had to do,” HHS head coach Tom Pinkston said. “If we can fix our mistakes, I think we will do a whole lot better.”

Highland Home had 33 rushes for 224 yards and 56 passing yards making a total of 280 yards for the Flying Squadron. Highland quarterback Kase Kelly had 10 rushes for 35 yards and sophomore Lewis Johnson had 20 rushes for 191 yards.

Next week will be a challenge for Highland Home as the Squadron travel to Elba.

“We play number one in the state, and we’ll have to get ready,” Pinkston said.