Commercial vehicles collide on I-65 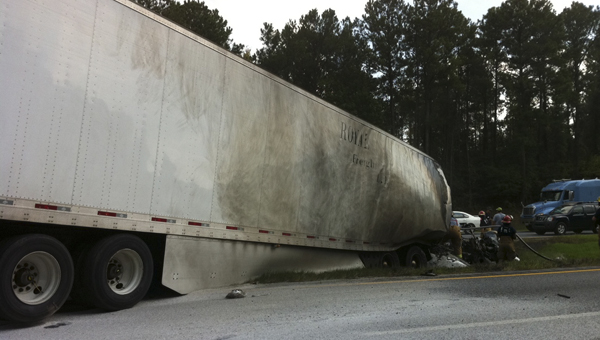 A pair of commercial vehicles collided on Interstate 65 South near mile marker 125 in Butler County. (Photo Courtesy of Ed Williams)

A collision between two commercial vehicles Friday on Interstate 65 South sent one driver to the hospital and slowed the flow of traffic for nearly seven hours.

According to Alabama State Troopers the accident, which involved a dump truck and an 18-wheeler, occurred at 1:44 p.m. near mile marker 125 in Butler County. The driver of the 18-wheeler was injured during the accident and was transported to L.V. Stabler Memorial Hospital where he received treatment.
“There was only one minor injury,” Sgt. Steve Jarrett said.
The collision ruptured the 18-wheelers fuel tank causing the vehicle to burst into flames and forcing authorities to shut down both southbound lanes and divert traffic to the emergency lane. The southbound lanes were reopened at approximately 8:30 p.m.
According to Jarrett, the cause of the accident is still under investigation.