Bulldogs shut out Tigers 19-0 in rivalry 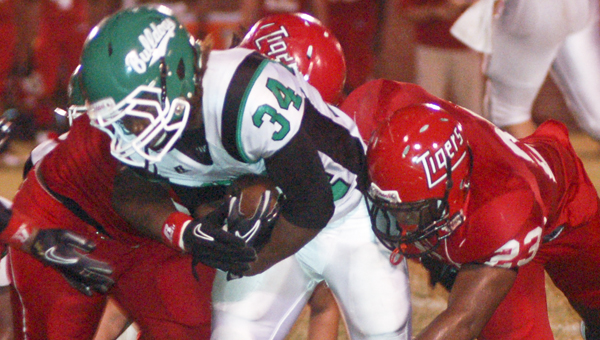 The Brantley Bulldogs forced turnovers at the right time and capitalized on them to help earn a 19-0 victory over rival Luverne on Friday night.

In fact, it was an interception and return by Brantley’s Taylor Tew that sealed the game.

Luverne’s Dontrell Hall picked off a pass by Andrew Lowery to give the Tigers the ball their own 15-yard line with just over three minutes to play in the game.

Down 12-0, the Tigers moved the ball quickly down the field, but Tew stepped in front of a pass from Tige Townsend and raced 87 yards down the sideline to the endzone.

“Coach told us that if we could get an interception, the game would be over,” Tew said. “I tried my hardest to get it.”

Another Luverne turnover led to Brantley’s second touchdown of the night early in the fourth quarter.

A high snap on a punt led to a broken play and an attempted pass, which was picked off by Tew and returned inside the 10-yard line, but a penalty on the return moved the ball back to the 35.

Brantley’s Andrew Parker picked up a first down on fourth and two, and several plays later he spun his way into the endzone on a 14-yard run to stretch the lead to 12-0.

“Andrew had a big game for us,” said Brantley head coach David Lowery. “He stepped up, and it helps having a fresh running back in there.”

Brantley’s other main running back, Zach Wiley, scored on a 36-yard screen pass from Lowery near the end of the first quarter for the game’s only score until the final period. 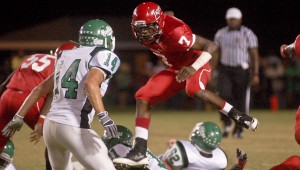 The defenses for both teams stepped up throughout the game.

In addition to the two interceptions in the second half, Tew had a pick on the first play of the second quarter to give him three on the night.

Terence Bogen also came up with an interception in the fourth quarter.

However, the Bulldogs also found themselves on the giving end of a few turnovers.

A promising first drive ended with a fumble on a reverse attempt that was recovered by Nick McManigle for Luverne.

Hall also had a second-quarter interception to go along with his fourth-quarter pick.

“Turnovers were a big part of the game, but I think the difference was that our turnovers were at their end of the field, so they had farther to go,” Lowery said. “Our defense also played as well as they could have played against a great offensive team.”

One of the turning points of the game came in the second quarter when Luverne made it as far as the Brantley six-yard line but came up empty on fourth and goal.

“We moved the ball well at times, but we had some penalties that hurt some drives,” said Luverne head coach Les Sanders. “We also didn’t tackle well and had trouble getting off the field on third and long.”

The Tigers made it inside the Brantley 10-yard line at the end of the game, but time expired before Luverne could make it into the endzone. However, that effort was one of the strong points of the game for Luverne.

“We hung in there and played well and fought,” Sanders said. “I’ve just got to get people in the right spots.”

“Luverne has a fine football team, and I think they’ll bounce back and make the playoffs,” Lowery said.

Both teams continue the march toward the postseason next week.

Brantley plays host to Pleasant Home for homecoming and Luverne travels to Slocomb.