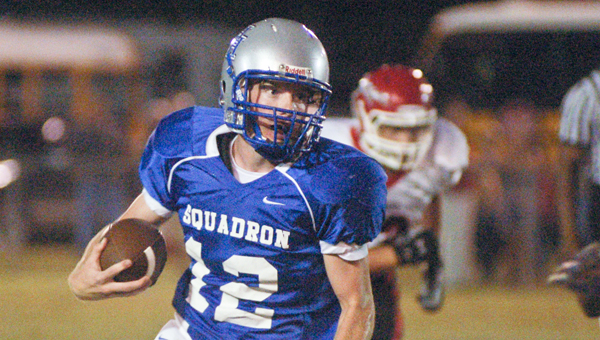 John Dunn had a number of carries for the Flying Squadron.

A missed extra point was all the opportunity the Zion Chapel Rebels needed to pull off a 21-20 overtime win over the Highland Home Flying Squadron.

Tied 14-14, the Rebels missed a field goal at the end of regulation that would have ended the game, but the game went into an extra period.

Highland Home got the first possession, and quarterback Kase Kelly scored from eight yards out, but the Squadron missed the extra point.

When Zion Chapel scored a few plays later, the Rebels converted to win the game.

“We were moving the ball, but we also stalled a good bit on drives,” said head coach Tom Pinkston. “We also had some miscues.”

A muffed punt set the stage early, but the Squadron was able to overcome that turnover and put points on the board first when Kelly hit Raheem Berry for a 30-yard touchdown pass.

As the first quarter wound down, Zion Chapel responded with a 50-yard touchdown run.

The Flyboys drove down inside the Zion Chapel 20-yard line, but a fumble ended the drive.

With under a minute to play in the half, Kelly found Jake Dean on a five-yard touchdown pass on fourth down to take a 14-7 lead into halftime.

“We just didn’t do a good job of running the ball in the second half,” Pinkston said. “They were loading the box and forcing us to throw it, but we couldn’t make plays.”

The loss is the Squadron’s first of the season.

Next week, Highland Home will travel to Georgiana to face the Panthers.