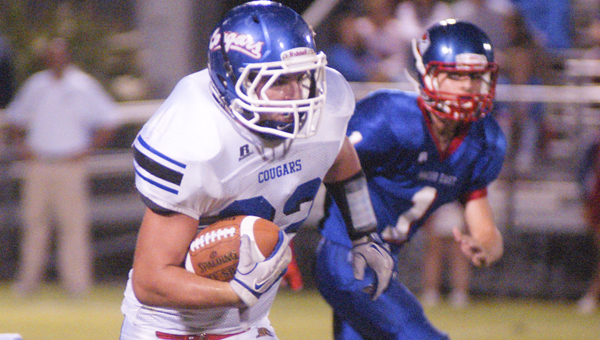 Will Moses scored the game-winning touchdown for the Cougars.

The Crenshaw Christian Academy Cougars used a strong second quarter to pull off a 28-22 win over Class AAA Macon-East Montgomery Academy in Cecil on Thursday night.

The Knights jumped out to an early 8-0 lead, but the Cougar rushing attack got rolling in the second quarter.

Following a drive assisted by penalties, quarterback Gunnar McCollough scored from a yard out.

On the ensuing possession, CCA recovered a fumble and after rushes from McCollough, Shaun Lewis and Will Moses, the Cougars were in the endzone again for a 14-8 lead.

McCollough added another 33-yard touchdown run with less than four minutes to play in the half to make it 21-8.

The Knights scored on the second possession of the third quarter to cut the lead to a touchdown, and CCA faced a tough decision with under three minutes to play in the game.

With the score 21-14, the Cougars had the ball on the MEMA one-yard line on fourth down.

While it looked like head coach Roland Jones would attempt a field goal at first, the Cougars called a timeout and reconsidered.

Coming out of the timeout, Moses blasted the ball that one yard to put CCA up 28-14.

“We just felt like we could get it,” Jones said. “It’s something you work on in practice, and Will is a strong runner. If we missed the kick, they’d get the ball at the 20-yard line, but if we missed the touchdown, they’d have it inside their one-yard line.”

The Cougars needed that extra touchdown cushion because Macon-East found the endzone in four plays to cut the lead to 28-22.

However, the game was put on ice when CCA recovered the onside kick attempt.

“We relaxed a little at the end, but we’ve got to play all the way to the end,” Jones told the team after the game. “This was a good test, and we stepped up to the challenge.”