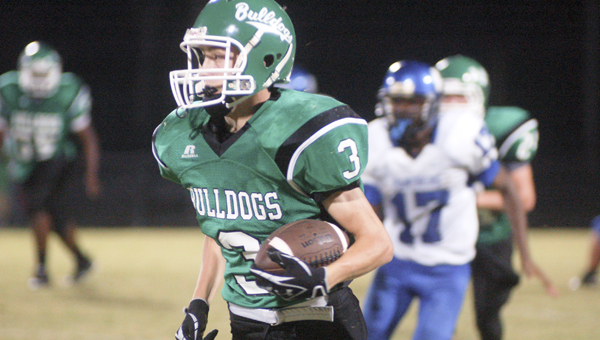 Taylor Tew returns a punt for a touchdown against Georgiana.

Brantley continued to plow through region play with a 61-0 victory over Georgiana on Friday night.

Reed Kilcrease got the Bulldogs on the board first with a 27-yard touchdown run, followed by touchdowns from Zeth Johnson, Andrew Parker and Andrew Lowery to make the score 28-0 after the first quarter.

Lowery connected with Jared Wiley and Kilcrease on two touchdown passes in the second quarter to stretch the lead to 41-0 at halftime.

The Bulldogs went on to score three times in the second half: another run by Parker, a 65-yard punt return for a touchdown by Taylor Tew at the end of the third quarter and a two-yard run by sophomore Willie Daniels.

Brantley head coach David Lowery said that it wasn’t one player in particular who led the charge, but a solid effort by the entire squad.

“We executed better than we have in previous weeks,” he said. “Our offense looked sharper, and the defense played well.”

On the other side of the ball, the Panthers managed just six first downs in the game.

“We just got schooled by one the perennial powerhouse in the region,” said Georgiana head coach David Watts. “We’ve just got to get back to work on Monday. Nothing comes easy.”