An opportunity to remember 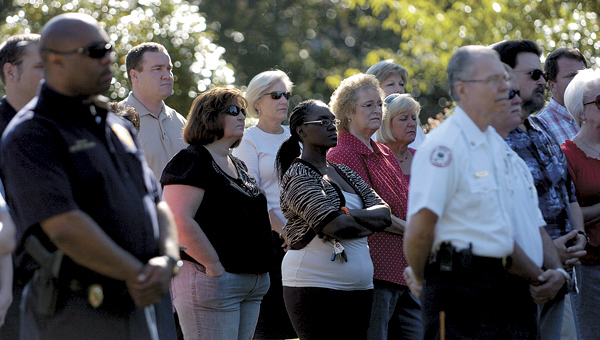 Members of the community gather in Confederate Park Friday to mark the anniversary of the Sept. 11 terrorist attack on the United States. (Advocate Staff/Andy Brown)

There are days that are stamped into a person’s memory.

“I’ll never forget that day,” McLendon told a group gathered to recognize the 10th anniversary of the terrorist attack. “Barbara Philpot walked into my office and told me to turn the television on. She was as pale as I’ve ever seen her, so I turned on the television and I couldn’t believe what I was seeing. I couldn’t believe that someone could do that. I still get chills thinking about it.”

McLendon said the anniversary offers an opportunity for Americans to “remember how much we have to be thankful for.”

“We’re fortunate here in the City of Greenville that we have a community that comes together and works together,” McLendon said. “We need that now more than ever.”

The memorial event was hosted by Alacare Home Health & Hospice, and featured music by the Greenville High School band.