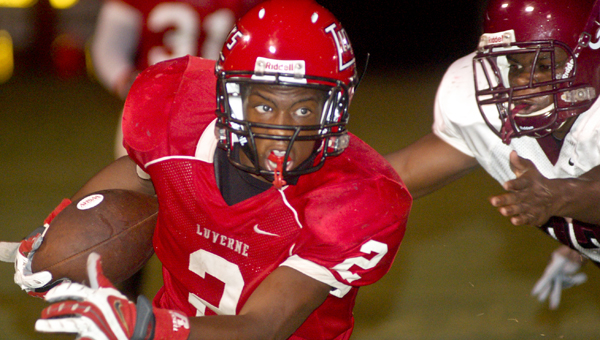 Jonathan Chambers tries to evade the tackle of an Abbeville defender.

Four quarters wasn’t enough for Luverne and Abbeville, but the Yellow Jackets came away with the 28-26 win in the first overtime.

Luverne trailed 20-7 until an interception by Quez Watkins with just over nine minutes to play started turning the Tigers’ fortunes around.

The Tigers embarked on a long scoring drive led by quarterback Tige Townsend, who had a number of key rushes for first downs.

Townsend connected with Jamarcus June on a short pass for a 20-yard touchdown with 4:59 to play.

A three-and-out by Abbeville set the stage for another Luverne drive, which was capped by a quarterback sneak from Townsend to tie the game at 20.

Just as the defense stepped up for Luverne earlier in the game, Abbeville’s specials teams made a play by blocking the extra point and keeping the game deadlocked.

Abbeville had the overtime’s first possession, and Javen Williams took the handoff 10 yards around the right end for a touchdown.

Jerrel Nelson added the two-point conversion for an eight-point lead.

Two runs and an incomplete pass later, Luverne faced fourth down and eight yards to go, but Townsend somehow found Tyler Best in the back of the endzone for a touchdown.

However, the two-point conversion came up a yard short.

“This is a tough place to win,” said Abbeville head coach Al Shipman. “Coach Sanders has Luverne coached up, and I’m really proud of our guys because we beat a good team.”

“We just made one more play there at the end,” he continued. “We also went into overtime in the spring, and I think that also helped us here.”

Luverne head coach Les Sanders said that even though his team got the offense rolling in the second half, it was difficult to overcome first-half miscues.

Both of Abbeville’s first half touchdowns came after turnovers by Luverne.

Christian Stamper intercepted a pass and returned it for a touchdown to put the Yellow Jackets up 6-0 early in the game.

Luverne responded with a drive and a quarterback sneak from Townsend to go up 7-6, but the Tigers later fumbled just before halftime.

“We talked about doing the little things right all week,” Sanders said. “We had a lot of penalties, and that’s tough against an athletic bunch like Abbeville.”

“We handed them a couple of scores in the first half, but we also showed a little something with that comeback,” he added.

Neal also had Abbeville’s only touchdown of the second half, which was a 66-yard reception on a deep pass from King.

The region win was the first of the season for Abbeville.

The Highland Home Flying Squadron pulled out a big play just when it mattered most: trailing by three points with... read more