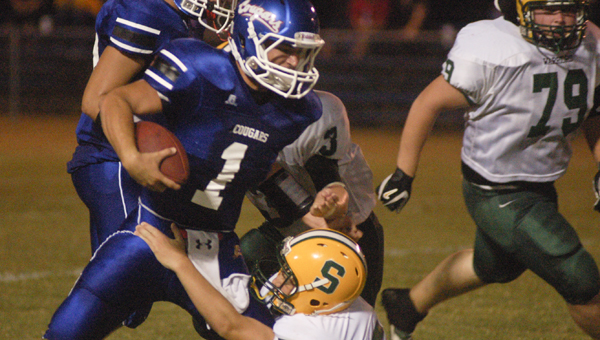 After a slow start, the Crenshaw Christian Academy Cougars got the ground game rolling to top Sparta 47-21.

Senior quarterback Gunnar McCollough had a career night, carrying the ball 17 times and racking up 259 of CCA’s 430 rushing yards.

“Gunnar had a great game for us,” said head coach Roland Jones.

McCollough also had four touchdowns, including three in the first half.

With 5:24 left in the first quarter, McCollough ran 17 yards for the touchdown, but Sparta responded with a 56-yard touchdown pass to take a 7-6 lead.

Sparta mounted a drive, but a fumble and recovery by the CCA defense ended the threat.

The Cougars marched down the field and Will Moses scored from 22 yards out with 2:13 to go in the half to make the score 26-7 at halftime.

In the second half, Shaun Lewis had a number of key plays, including a three-yard touchdown run and a 98-yard kickoff return for a touchdown.

McCollough was the team’s leading rusher with 259 yards, and Moses carried the ball seven times for 78 yards.

Despite the convincing win, Jones said the Cougars still have some improving to do.

“Our defense was missing tackles, and we’ve just got some young kids that have to grow,” he said. “We’ve also got to grow up as a team. We got off to a slow start, and I feel like we’re playing to our opponents instead of to our potential.”

Leading the Cougars defensively were Rann Smyth, who had 12 tackles, one assist and caused a fumble, Chris Wooten, who had seven tackles and two assists, and Justin Fuller, who recorded six tackles and three assists.