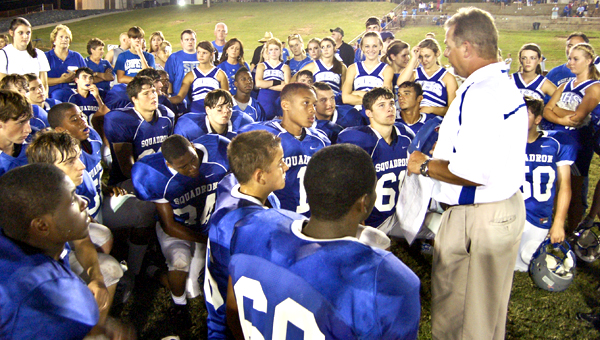 Head coach Tom Pinkston talks to the team following the win over Central.

For the second year in a row, the Highland Home Flying Squadron opened the season with a win over Central-Hayneville – this time by a score of 68-14.

Quarterback Kase Kelly had a solid night for the Squadron by throwing for three touchdowns and running for one.

Raheem Berry was on the receiving end of two of those touchdown tosses, and Chris McCullough caught the other one.

Lewis Johnson had a career night at running back with four touchdowns, and Darrell Greene wasn’t far behind with two scores.

One concern for Highland Home head coach Tom Pinkston was injuries as several HHS players got banged up during the game.

“We had a couple of injuries, but we hope they’re minor,” he said.

Pinkston also said he was pleased to start the year with a win.

“After beating a team like Brantley, it’s easy to have a letdown the next week,” he said.

Next week, the Squadron play host to Samson, who beat them by 20 points last year.

“What they do is tough to defend,” Pinkston said. “We need to have everyone in place by the time we play them.”