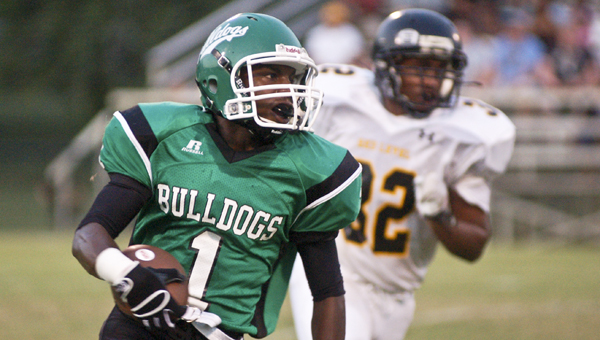 If the Brantley Bulldogs suffered any kind of hangover after last week’s preseason loss to Highland Home, they didn’t let it show in a 62-0 rout of Red Level.

“I thought we had a really good night on both sides of the ball,” said head coach David Lowery. “It was a little bit different getting ready for a regular season game, and we played a lot better because of the hard work.”

Running backs Zach Wiley and Andrew Parker both contributed key runs for the Bulldogs in the first quarter.

However, the first score of the night was a 12-yard screen pass from Andrew Lowery to Jared Wiley.

Zach Wiley broke into the endzone with 5:50 to play in the first quarter to put the Bulldogs up 14-0.
Then, it was the defense’s turn to step up.

Pressure on Red Level’s quarterback by the Brantley defensive line contributed to a interception by Terence Bogen, who returned the ball 40 yards to the Red Level 20-yard line.

That return was negated by a penalty during the return, but it didn’t matter — Zach Wiley broke a 55-yard run for the Bulldogs to make the score 22-0.

Chester Person was the next Bulldog to run wild with a 40-yard scamper to 17-yard line on the next possession, and Wiley punched it in from seven yards out.

The touchdowns kept coming for Brantley, and by halftime, the Bulldogs led 43-0.

That lead grew with three more touchdowns in the second half.

“We got to play everyone quite a bit, and got good work in for our running backs,” Lowery said. “Zach Wiley had another good night, and so did Andrew Parker. Our offensive line played well, and that makes it easy on the running backs.”