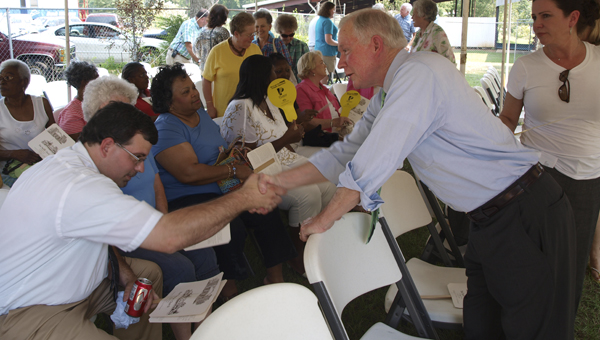 On a sweltering August afternoon, dozens braved the 100-degree heat to turn out for U.S. Sen. Jeff Sessions on his visit to Georgiana.

Sessions, who spoke to the attendees beneath a tent adjacent to the Hank Williams Boyhood Home and Museum, joked when he saw the abundance of hand fans waving in front of him.

The senator spoke fondly of the legacy left by Butler County’s most famous native son.

“Hank Williams was an extraordinary individual who will long be remembered for his input into American music and culture,” Sessions said.

“My wife found me a Hank tape somewhere in Maryland and I’ve just about worn it out.”

After opening remarks regarding the importance of maintaining a strong military and the importance of remembering and honoring all service members, Sessions spoke on the topic of the increasing federal deficit. “Even when the economy comes back, it isn’t going to fix everything. We still have to cut spending,” he said.

Sessions held a Q&A session after his brief talk, touching on subjects such as gas prices, unemployment benefits and the recent passage of the new illegal immigration laws.

Following the Q&A, the senator chatted with several attendees and toured the museum with its manager, Margaret Gaston.