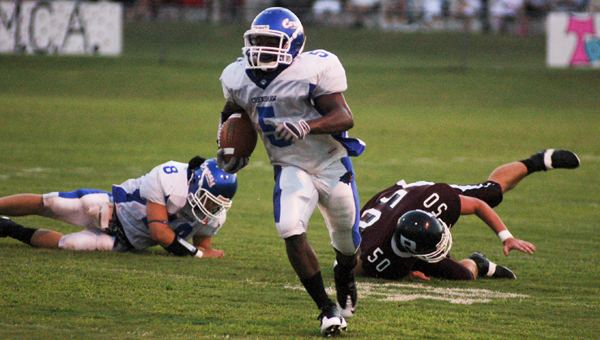 CCA's Chris Wooten breaks a long run for the Cougars.

The Crenshaw Christian Academy Cougars made the trip to Grady on Thursday night where they put a 49-7 thumping on rival SMCA.

The Cougars wasted no time in getting on the scoreboard with an eight-yard touchdown run by Gunnar McCollough less than two minutes into the game.

McCollough had a 28-yard run in the Cougars’ next scoring drive, which was capped with a five-yard touchdown run by Gavin McKenzie.

CCA continued the assault in the second quarter with a three-yard run from Shaun Lewis.

A fumbled kickoff return by SMCA put the Cougars in position for Lewis to punch it in again 15 seconds later to make the score 28-0.

Late in the half, McKenzie got the Cougars to the two-yard line where Lewis once again got into the endzone.

Early in the second half, CCA’s special teams stepped up and blocked a punt, which was recovered by Rann Smyth.

This time around, it was Will Moses who scored for the Cougars. Justin Williamson also scored in the third quarter for CCA’s final TD of the night.

“We played some tough scrimmages against Fort Dale and Pike, and I felt like our confidence might have been a little down,” said head coach Roland Jones. “I’m proud of the guys for the win, but we can’t get complacent.”

“We’ve got a lot of things we can do to get better,” Jones said.

One positive was that the Cougars played 39 players in the game.