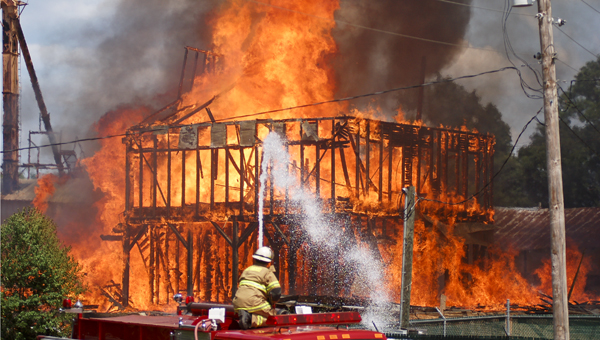 A large fire broke out at an old peanut storage building near the Luverne Co-op on North Forest Avenue shortly before 2 p.m. Thursday afternoon.

Luverne assistant fire chief W.A. Neal said that the building was in the process of being torn down when the fire started.

Neal said that the LVFD believes that a hydraulic fuel line from work machinery burst and was set ablaze by a cutting torch.

“There was plenty of fuel and it took off from there,” he said.

Some 24 firemen from Luverne, Rutledge, Glenwood and Fuller’s Crossroads assisted while firemen from Brantley waited on standby.

“Nobody got hurt, which we are thankful for, especially when you’re out there working on a day as hot as today is,” Neal said. “We were also very thankful to get as many firemen out as we did.”

“This was the biggest fire we’ve had in Luverne in at least 25 years,” he added.

The State Fire Marshal’s Office will also be conducting an investigation.