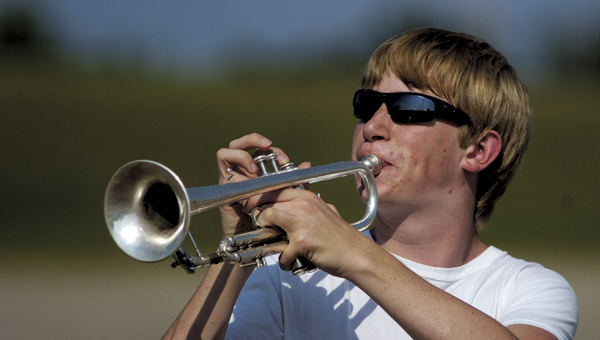 Greenville High School junior Brandon Duke and the Tiger Pride Marching Band will entertain the crowd at GHS football games with a halftime show that will feature songs such as “We R Who We R” by Ke$ha and “Poker Face” by Lady Gaga. (Advocate Staff/Andy Brown)

This year, the hits won’t stop when the teams leave the field for halftime.

That’s because the Tiger Pride Marching Band will keep the hits coming with its halftime show  “Radio Mega Hits.” The show will feature  “We R Who We R” by Ke$ha, “Poker Face” by Lady Gaga, “Cupid Shuffle” by Cupid and “Raise Your Glass” by Pink.

“It’s a very modern show that students and parents have already expressed a great deal of excitement over,” first-year band director Jason Tucker said. “We had fans singing along in the stands last Friday night.”

The Tiger Pride Marching Band will perform its show in front of the home crowd Sept. 9 when the Tigers make their regular-season home debut against Paul Bryant High School.