Flying Squadron hold on against Brantley 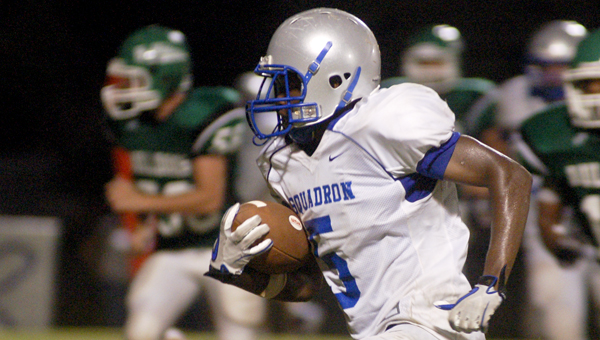 Highland Home's Lewis Johnson had two touchdown runs for the Squadron against Brantley.

The Highland Home Flying Squadron had the upper hand against Brantley for much of the night, but a last-minute turnover sealed a 28-20 win for HHS.

The Bulldogs were inside Highland Home’s 5-yard line with 1:33 to go when the Squadron recovered a fumbled snap.

“The game is full of breaks, and we were fortunate to get on that fumble at the goal line,” said Highland Home head coach Tom Pinkston.

The Squadron were able to capitalize on those miscues and not only run out the clock at the end of the game, but also stop a promising Brantley drive early in the second half.

A first-half turnover also led to the Squadron’s first score of the night, a two-yard run by quarterback Kase Kelly to put HHS up 7-0.

Brantley’s Chester Person responded with a bootleg touchdown run in the second quarter to cut the score to 7-6.

Kelly connected with Raheem Berry for a 34-yard TD pass in the second quarter, but Brantley’s Zach Wiley tied the game with a TD rush.

With time winding down in the first half, Highland Home’s Lewis Johnson broke a 70-yard touchdown run to give HHS a 21-14 lead at halftime.

Johnson added another touchdown run with a 16-yard scamper as time expired in the third quarter to make the score 28-14, but Brantley showed some fight late in the game.

Wiley had a 16-yard touchdown run of his own with 5:28 left in the game to bring it within one touchdown, and a double-reverse pass from Jared Wiley to Person to Jared Wiley put the Bulldogs in prime field position on Highland Home’s 14-yard line.

Lowery said that the Bulldogs need to improve in all areas of the game before next week’s showdown with Red Level.

“We did a lot right that we work on every day,” Pinkston said. “We had some good effort. John Dunn made some big catches for us and Lewis Johnson just made big plays, which is something that I think we were lacking last year. We’re growing up as a team.”

The Squadron will play host to Central-Hayneville for next week’s season opener.