School year off to ‘smooth’ start 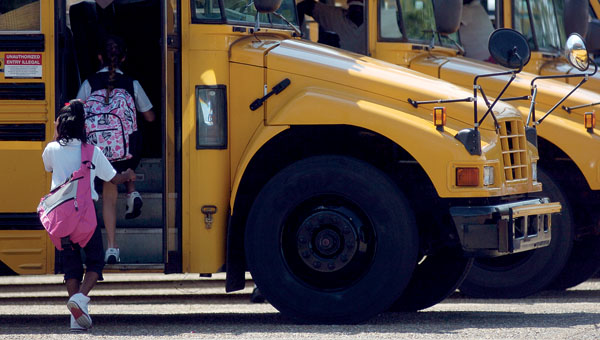 The buses are rolling, the bells are buzzing: school is back in session in Butler County. Students returned to class on Monday.

“We worked at getting the bugs out last year (Black’s first year as principal at the school) and that really helped. We looked at some things that previously had been a hindrance and addressed them.”

The GMS principal said the toughest adjustment among students was the transition of the fifth graders from the elementary school.

“Of course, we had an orientation at the end of the last school year and another one before this school year, but it’s still a new school and a lot of new faces to adjust to,” said Black.

“However, I do think things are going extremely well for the first day of school.”

Seventh grade history teacher Doris Rankins, with 30 years in the system “and counting,” said her students had been “really great.”

“I hope to make my classes enjoyable so that my students have fun while they learn. It’s better for all of us when that is the case,” Rankins said.

She does have one special request of the parents.

“Please make sure these children get to bed on time,” Rankins said. “We are really working hard and we want to make AYP again this year—so we need these children to be alert and focused.”

“We spend most of the first day going over the rules and procedures so they know exactly what is expected of them,” Burkett, who is at the beginning of his third full year at GMS, said. When asked what he thought his favorite subject would be this year, Jarod Powell, a 7th grader at the school, said, “Actually, I think I’m going to enjoy all of them.”

Powell, whose first day “was really good,” said he would also be serving as an office aide and working on the yearbook staff.

At Greenville Elementary School, Principal Jai Hill took a break to enjoy his lunch in the cafeteria as the first day of school continued.

“It’s been hectic but gone surprisingly smoothly,” Hill said as he kept an eye on the third and fourth graders milling around the cafeteria.

“We had a few parents and children who were unsure of where to go, but we got them steered in the right direction pretty quickly. I think we are off to a good start.”

Third grade teacher Elizabeth Tindal, in her fourth year at GES, said her students were as they typically are on the first day: “quiet and subdued.”

“It’s a new building, new rules and expectations for these kids,” Tindal said. “We spend most of the first day going over those rules and procedures and making sure they do understand what is expected of them.”

She and a fellow teacher also encouraged their students to use their little gray cells on a team project the very first day.

“The students each had to supply one sentence of a story about a robot, which they illustrated using shapes they will be learning about in math this year,” Tindal explained.

Julie Killough, a fourth grade teacher in her 11th year at GES, said her day had “gone very well and very quickly.”

“We are all enjoying it so far,” she said. “A lot of it the first day is getting them back into the mode for school and making sure they know what is expected of them.”

She said she is looking forward to a good year with the students and her peer teachers, “who are the best.”

“The kids keep you on your toes. And no two days are ever the same,” Killough said.