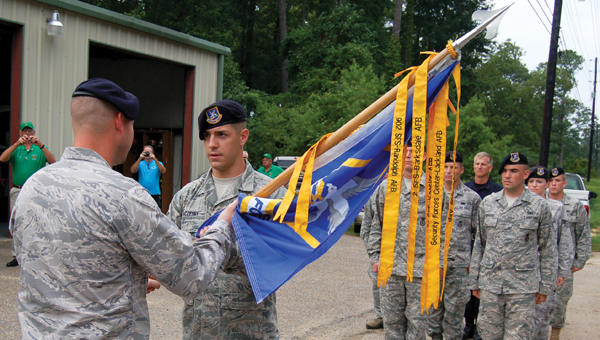 Captain Justin Secrest of the 23rd Security Force Squadron of Moody Air Force Base receives the SFS flag from Airman First Class Justin Paczesny of the 325th SFS of Tyndall AFB. Each ribbon attached to the flag represents a squadron that has completed its leg of the march.

The march began on July 12 at the Security Forces Center in San Antonio, Texas, and will travel over 2,000 miles to Shanksville, Penn. and Ground Zero in New York in time for the 10th anniversary of the 9/11 terrorist attacks.

Some 15 air forces bases are taking part in the march, and Brantley was the handoff point between Tyndall AFB in Panama City, Fla. and Moody AFB in Valdosta, Ga.

Members of the Tyndall SFS officially passed the flag to Moody in front of the Brantley Fire Department around 11 a.m.

“We want to thank you for what you do to help keep us free,” said Mayor Bernie Sullivan, who was among a small crowd of people and firefighters who had gathered for the occasion.

Many of the soldiers from Tyndall remarked that the showing of support meant a lot to them, and that they had received encouragement all along the way.

“It’s our honor to keep the flag going,” said Captain Justin Secrest, commander of the 23rd SFS from Moody AFB.

“A lot of sacrifices have been made since 9/11, and this is a great opportunity to get out, shed some sweat and blood, and show our appreciation,” he added.